Watch the Antiques Roadshow in Hackney on BBC One 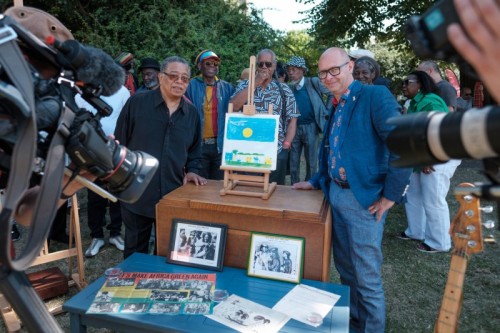 The first of three Antiques Roadshow episodes filmed at Clissold Park this summer will be broadcast on BBC One this Sunday 9 October at 6:20pm, and then made available to stream on BBC iplayer.

First airing in 1979, the Roadshow is one of the most popular factual programmes on BBC One, with around four million people regularly watching on Sunday evenings. For the past four decades, the award-winning show has visited hundreds of venues across the UK and a few abroad.

In July, hundreds of Hackney residents turned up to the day of filming in Stoke Newington to watch the BBC’s antique experts value their items. Amongst the family heirlooms and antiques brought by people for valuation were Baule carvings from Ivory Coast; psychedelic posters from 1960s San Francisco; a collection of exquisite Chinese jade treasures; examples of traditional African dress; 2,000- year-old ceramic pots from the Andes in Peru; a racing helmet and overalls worn by Lewis Hamilton; a rare archive of memorabilia from the movie ‘Blade Runner’; and a 19th century silver Torah breastplate that was once used in the Stoke Newington synagogue.

Hackney Museum staff also connected the production team with residents to share personal stories. This included former Mayor of Hackney, Ken Hanson, who brought his hot combs made in London shortly after he arrived from Jamaica in 1962. These antiques held strong memories for Ken, his family and the presenter as they reminisced about the challenges of caring for afro-textured hair at the time and heating the combs over a heater.

In next year’s episodes viewers can look out for reggae music legends, British Reggae Artists Famine Appeal (Brafa) members, who presented an original vinyl pressing of the single ‘Let’s Make Africa Green Again’, recorded in 1985 as Hackney’s response to Live Aid, before entertaining the crowds with an acapella rendition of the hit single.

Since 2019 Brafa has come alive again through the help of Hackney Council and many people in the borough. The Antiques Roadshow is a great platform to help spread our message throughout the UK and beyond. We are making progress in raising awareness about our project and we’ll continue to do this. I appreciate all the people that are here today. It has been a happy, beautiful day in the sunshine.

Hackney did the Roadshow proud! Clissold House is a great venue and the visitors reflected a great sense of community and inclusivity, proving that Antiques Roadshow has a genuine popular appeal. It was a most enjoyable and diverse day which gave me the opportunity – as a specialist – to work with objects and stories from a variety of different backgrounds.

Two more episodes of the Antiques Roadshow filmed in Hackney will be broadcast next year.

The programme will be available to view on BBC iplayer here

Watch the Antiques Roadshow in Hackney on BBC One