The Garden of Earthly Delights to stay near Hackney Central station 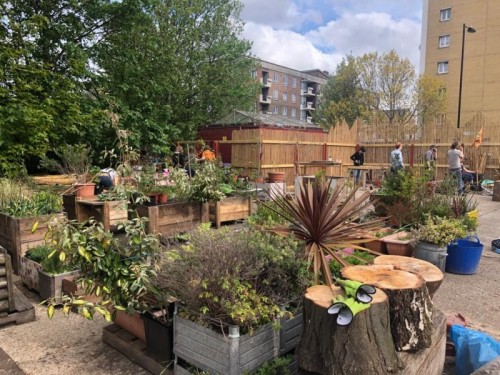 The Garden of Earthly Delights

A much-loved community garden and food growing space will remain in Hackney Central after being supported to move to a new location, as part of plans for a £3 million upgrade of Hackney Central station.

The Garden of Earthly Delights is relocating a short distance from its former site at 231-237 Graham Road to 161 Graham Road, adding to Hackney Central’s mix of green spaces and activating currently unused Council land which has been prone to fly-tipping and antisocial behaviour. The garden will keep providing access to nature and will create a communal space for education about biodiversity, permaculture, and climate change.

Fulfilling an ambition to make real and immediate changes in Hackney Central, the Council has offered the land for the garden on a temporary basis, while a long term permanent use for the site at 161 Graham Road is developed.

The garden is open to the public every Saturday between 2-6 PM, for residents to get involved with gardening and food growing. A number of community events will also be offered by the garden throughout the year, which will be publicised through the Garden of Earthly Delights’ social media platforms.

The next planned event is the Garden’s Assembly on 5 June, which will focus on discussing and reaching consensus about the shape and role of the new Garden of Earthly Delights with the neighbours and local community.

We are extremely happy that, with Hackney Council’s support, we can continue the community garden that was started in 2019, on a new temporary site. Everyone at the Garden of Earthly Delights is excited to continue what we see as a service for our beloved community.

As we have done in our previous location, our goal is to bring more green spaces to Hackney residents, provide food growing education and opportunities, community building, and a beautiful and accessible gateway for new people to get involved in climate activism.

Hackney Central will also see a £3 million upgrade to the Overground station, which the Council believes can be the catalyst for a cleaner, greener and more accessible town centre beyond the pandemic.

The improvements – being delivered by Arriva Rail London in partnership with Hackney Council, Transport for London and Network Rail and funded by the Department for Transport – include a new second entrance on 231-237 Graham Road to ease congestion and provide quicker and more direct access to the town centre.

The Garden of Earthly Delights to stay near Hackney Central station