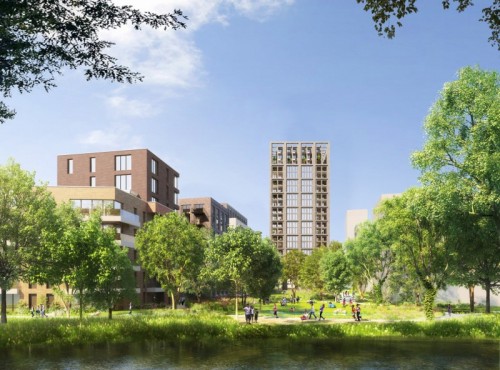 Plans for nearly 600 new homes alongside a new public park, 175 new trees and 29 tennis courts of open spaces on the Woodberry Down Estate are now being finalised after proposals approved by the Council’s Planning Committee in September 2020 were formally endorsed by the Mayor of London.

The plans for the third phase of the regeneration of the estate, which are supported by the local elected residents group the Woodberry Down Community Organisation, include 117 homes for social rent for families currently living in old, poor-quality homes elsewhere on the estate – nearly double the number of new homes for social rent built compared to original plans.

Berkeley Homes, alongside Hackney Council and the regeneration partners, are now developing a detailed programme to deliver these changes on top of the initial demolition work that has already taken place. This has included the safe removal of a London plane tree, known locally as the ‘Happy Man Tree’ so that the benefits for Woodberry Down residents can be realised.

As well as the new public park, 175 new trees and 29 tennis courts of open spaces, the plans also include 4,135sqm of biodiverse green and brown roofs, including vegetation and planting, as well as an energy centre to provide low-carbon heat for the entire estate and 1,060 new cycle parking spaces.

An independent report was also commissioned to understand the impact of the loss of the tree and what mitigation measures would mean for the biodiversity of the area. This report, submitted as part of the application approved last night, details that the mitigation measures put in place would have a net benefit on biodiversity on the estate. After months of workshops and meetings, it became clear that there was not a way to avoid removing the tree without causing a long delay to the construction of affordable housing, and a redesign of the project.

This tree had been identified for removal for more than a decade but, when the issue was raised last year, the application was paused and a series of workshops were held with elected resident representatives to look at other options for the design of the scheme.

I have always acknowledged the concerns people have in Hackney around the loss of mature trees and the need for more high-quality green infrastructure. Sadly in this case, to everyone’s disappointment, the removal of this much-loved tree will ensure that we can continue with our plans to deliver 584 much-needed homes – including 117 genuinely affordable homes for social rent for local families currently living in old, poor-quality homes elsewhere in Woodberry Down.

This is a last resort and something that the developer, Berkeley Homes, alongside Council officers, myself and local councillors, spent a long time working through with residents to explore every possible option to avoid. This was never an easy decision, however it was the only way to avoid huge delays to desperately needed new homes and a complete redesign of the project, and is supported by the local elected residents group, the Woodberry Down Community Organisation. It was then approved on two occasions by the Council’s independent planning committee.

We look forward to working with Berkeley Homes, the Woodberry Down Community Organisation and the local community to provide much greater investment, including in this phase, in trees, open spaces and green infrastructure while continuing to champion the environment across the estate and Hackney.

Losing a much-loved tree is never easy, but here’s why it's necessary

Hundreds of genuinely affordable homes at Woodberry Down approved

5,000 new street trees to be planted in Hackney

Responses to the plans

“Whilst it is never easy to lose a well-liked tree – following a thorough, transparent and balanced debate Berkeley, Hackney Council and the Woodberry Down Community Organisation (WDCO) all support the local planning authority’s decision to approve the development of the Phase 3 scheme and for the associated removal of the tree.

“We remain committed to ensuring that the Phase 3 benefits are delivered for the local community as quickly as possible including 584 new homes, a brand new park, the planting of 175 new trees and an energy centre to generate heat to supply the whole of the estate.”

Phil Cooke, Chair of WDCO said: “The aim of the Woodberry Down Community Organisation (WDCO) is always to design good quality new homes and improve the living environment of our residents, old and new.

“When we became aware that the tree was due to be removed we got the partners to look at ways that it could be kept, but they all would mean a lengthy delay in the regeneration. The WDCO Board considered all options at its meeting on 2 September and voted in favour 12-4 to support the Phase 3 planning application.

“There is an urgent need to build new homes for tenants that are living in old, inadequate, cold and sometimes damp properties. Many of these, mainly, elderly residents have been waiting 20 years for new homes and the proposed delay for a redesign was too long.

“Looking forward, we want to keep as many of the existing trees on the estate as possible, and make sure many more new trees are planted so that the green environment and biodiversity of the estate is the best that we can make it.”

“London Wildlife Trust acknowledges the disappointment felt by many of the felling of a much-loved tree in the Woodberry Down estate. Whilst of limited value to biodiversity, London plane trees can provide grandeur as well as help mitigate impacts of climate change.

“We believe these matters were taken into full consideration by Hackney Council in their decision. Nevertheless, we recognise that as partners in the newly published London Urban Forest Plan, the loss of some trees through development and regeneration in many parts of the city needs to be compensated by a significant uplift in tree canopy cover and other net gains for biodiversity wherever possible.

“In this respect Berkeley Homes’ efforts to create ecological landscaping and new planting outweigh the loss of a number of trees through the regeneration of Woodberry Down, and the Trust will continue to advise developers and to advocate for ensuring new housing incorporates ecologically sound planning and net gains for biodiversity.”