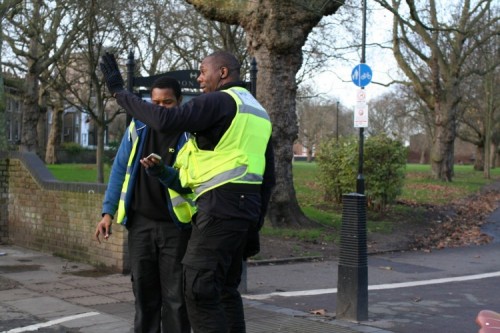 Hackney’s community safety wardens are one of the links between the Council and the community. The wardens wear a uniform, patrol the streets and they issue fines for antisocial behaviour, such as littering, noise, dog fouling and graffiti. They have powers to seize alcohol and deal with incidents of street trading. Wardens also work closely with the police and they are on hand to give residents help and advice.

Hackney has 16 wardens, three teams of five patrol the boroughs 21 wards from 8am to 10pm Monday to Thursday. Friday to Sunday wardens patrol until 4am in Dalston and Shoreditch managing the balance between those who want to go out in Hackney and the people who live here. But what is it like to walk a few hours in their shoes? Sam and Tom are two of 16 community wardens patrolling the streets of Hackney.

On a cold, bright December afternoon the CCTV van pulls into the Narrow Way and out jumps a team of wardens ready for their afternoon patrol. The CCTV van is there to provide re-assurance to the community and it helps prevent crime. It links in with the main CCTV unit so the wardens can use it at when they are out on the streets of Hackney.

Sam and Tom set off up the Narrow Way towards an illegal trader selling CDs, as they get nearer the young man packs up his stuff, jumps on his bike and pedals off into the distance. Tom says: “He’s been warned about illegal street trading. We told him that if he continued, he would be fined. We will come back and seize his CDs with the police and if he’s here, he’ll be issued with a fixed penalty notice.” Wardens have now seized his CDs and he’s been reported for illegal street trading.

The duo continue through St. John’s Church Yard on the look-out for street drinkers and beggars, but the area is quiet. In recent months ‘hot spots’ including the Narrow Way have been targeted in joint operations with the police. These have resulted in the seizure of alcohol and issue of Anti-Social Behaviour Warning Notices for begging and street drinking, as well as the first Community Protection Notice under the new ASB laws. The wardens also work closely with outreach workers, putting those that need support in touch with organisations that can help.

You get to know people and you find out more about their lives. We always try and offer help and support and put them in contact with services and organisations that can help. If they refuse help and support then we start issuing enforcement notices.

Being a warden is about more than just enforcement and giving out fines. Both Sam and Tom build relationships with local businesses and residents of all ages, and they are a great source of information. Tom happily chats away with a trio sitting on benches in London Fields while Sam gives a young man directions. On Mare Street, Tom stops to talk to a window cleaner and Sam chats with a well-known beggar. He says: “You get to know people and you find out more about their lives. We always try and offer help and support and put them in contact with services and organisations that can help. If they refuse help and support then we start issuing enforcement notices.”

Back on the Narrow Way an old man has damaged his mobility scooter. Ever-ready to help Tom calls the man’s son and waits around until he arrives to take him home. Sam is approached by a member of the public and is taken to a bag that’s been left in the street. Sam phones the police to report a suspect package and makes a call to the office. Emergency planning officers arrive to cordon off the area and the police follow. It’s not long before the suspect package is given the all-clear and the cordon removed. Mare Street gets back to its usual ebb and flow of people and traffic.

David Shipp, Lead Community Safety Warden, adds: "We are one of the Council’s links with the public. We are there to reassure, engage with communities and tackle anti-social behaviour. We are always happy to come along to community events, in fact we look forward to them!

“We work closely with police and we have over 38 enforcement powers which include issuing Fixed Penalty Notices for littering, urination, dog fouling, graffiti and fly-tipping. Most importantly we are here to make Hackney safer and a better place for everyone. "

Being a warden is hectic and in the course of day anything can happen. Next time you see a warden walking the streets of Hackney, say hello!

If you would like to contact your neighbourhood warden, or invite them to a community event or group meeting you can call 020 8356 6867 or email wardens@hackney.gov.uk