'Valuing every citizen': Why Hackney flew a flag for the Commonwealth 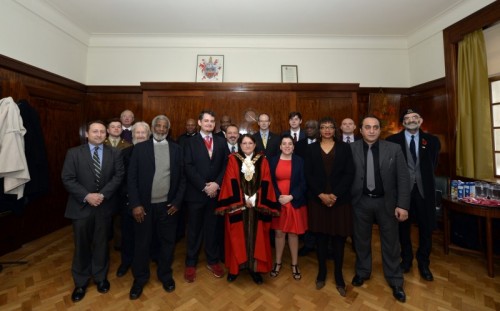 The victory of light over dark and recognising the “worth of every citizen” were celebrated when Hackney stood shoulder to shoulder with countries from across the world to Fly a Flag for the Commonwealth.

The blue and yellow standard was raised above Hackney Town Hall on Monday at 10am in union with hundreds of others from across the globe who share the values of the Commonwealth Charter, including democracy, inclusion, rule of law and human rights.

Joining together as members of one worldwide Commonwealth community, and valuing the personal dignity and worth of every citizen, we raise this flag as a symbol of the ties of kinship and affinity that we cherish.

We draw inspiration from our diversity, and the opportunities for working together, as a rich source of wisdom and a powerful influence for good in the world.

It is the second year of the event and Monday saw more than 700 Commonwealth flags displayed in 38 Commonwealth countries.

Following the flag raising, Cllr Patrick invited attendees to her parlour for a candle ceremony: a commemoration which sees four candles extinguished and one relit every year of the centenary of the First World War to remember those who died during the conflict and in all wars since.

She said: “By extinguishing the candles we are symbolically representing the feeling of darkness that came over Europe 100 years ago. In 2018, after the annual candle is extinguished and a brief period of darkness, this room will be lit by the lighting of all four candles - this symbolic gesture will represent ultimately how light won through the darkness.”

After the ceremony Martin Sugarman, a member of the public, presented the story of Hackney soldier Samuel Goldman, a member of the Royal Inniskilling Fusiliers who died aged 21 in the last battle of the Somme, to the soldier’s great nephew Monty Goldman.

The Commonwealth is made up of 53 states - mostly territories of the former British Empire - spanning nearly a quarter of the globe and incorporating more than 2.3 billion people.

'Valuing every citizen': Why Hackney flew a flag for the Commonwealth