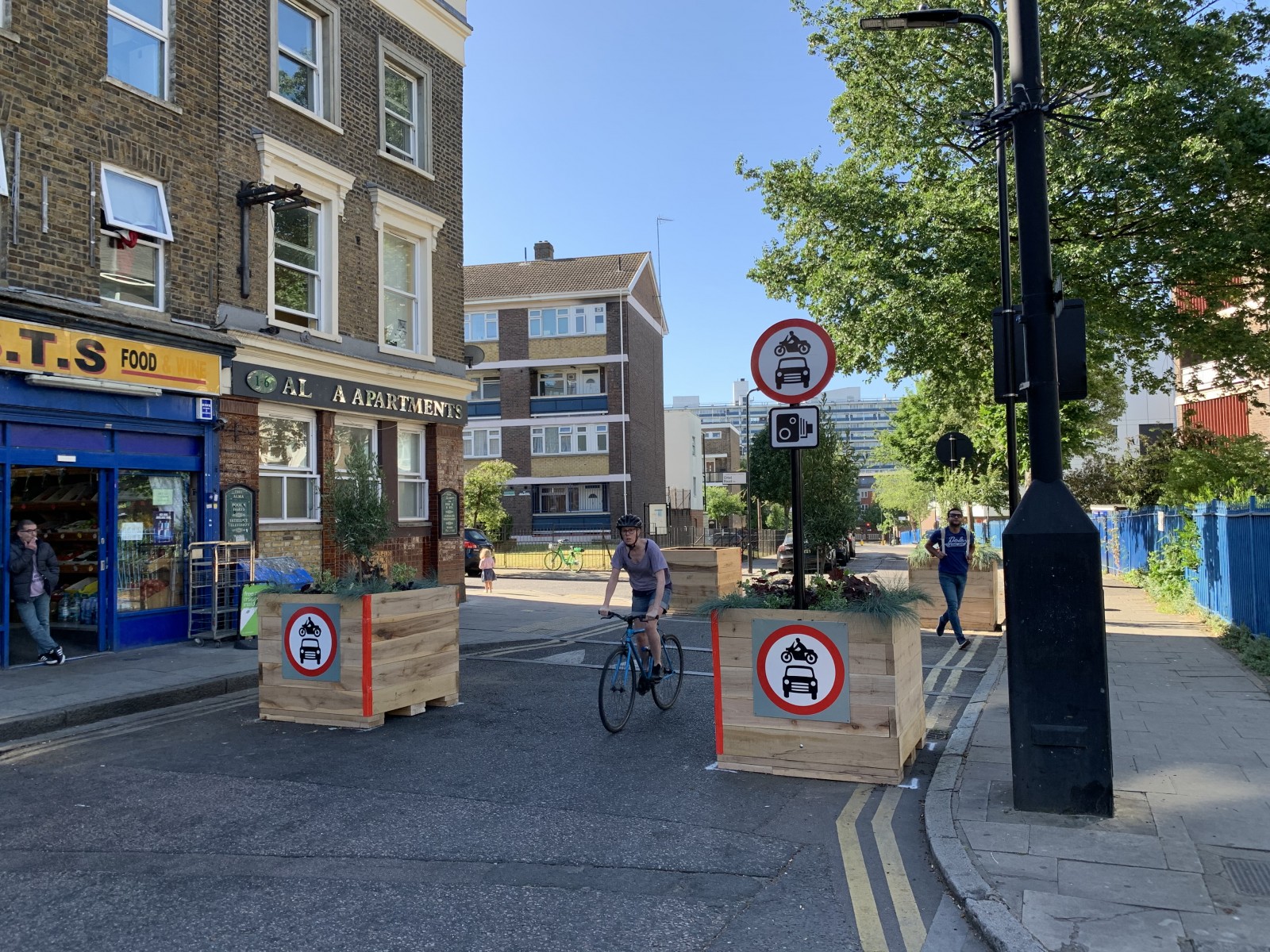 The traffic filter at Barnabas Road, which forms part of the Homerton low traffic neighbourhood

An initial analysis of traffic counts around Hackney’s trial Homerton low traffic neighbourhood (LTN) shows early signs of traffic reduction, with traffic down both in the neighbourhood itself and on boundary main roads.

Traffic inside Homerton LTN was down by an average of 40%, with traffic on boundary roads around the LTN also down by 7%, showing early indications of the ability of low traffic neighbourhoods to reduce traffic, support people to walk, shop and cycle locally and help rebuild a greener Hackney in the aftermath of the pandemic.

Among the boundary roads, there was a rise in traffic in Homerton High Street of 6.5%, which is thought to be partly attributable to the 12,000 key worker parking permits that the Council has distributed during the pandemic, many of which were focussed around Homerton Hospital. However, the Council is continuing to monitor traffic in the area and will continue to publish this data.

The analysis uses traffic counts taken during November’s lockdown, when schools were open but overall traffic levels in Hackney were lower than pre-pandemic levels, and considers the impact of lockdown alongside reductions in traffic after the introduction of the low traffic neighbourhood. The counts were then compared with data from before the pandemic.

A benchmarking exercise to understand the impact of lockdown on traffic over the same time period shows there were traffic reductions of 16% nationally on urban roads, 15% on the A12 and an average of 14% reductions on main roads in the borough. The initial traffic surveys show that within the LTN, traffic reduced, on average, by more than these benchmarks.

The Homerton LTN was introduced last September, as part of the Council’s efforts to rebuild a greener Hackney, and support people to walk, shop and cycle in the wake of the pandemic.

The Council is aware of increases in traffic on Glyn Road and will continue to monitor these streets so it can address issues there.

We’ve been monitoring traffic levels in and around our low traffic neighbourhoods, with the first set of results showing a broad reduction in traffic in the London Fields area, helping to rebuild a greener Hackney for our residents and supporting them to walk, shop and cycle locally.

We’ve sent leaflets out to the Homerton area to encourage residents to have their say by 31 May, after we extended this engagement period earlier in the year. After this, we’ll consider residents’ comments, continue to analyse traffic and air quality data and make a decision on whether or not to make this trial permanent.

Residents can have their say online at: https://rebuildingagreenerhackney.commonplace.is/ or by writing for free to the Council at ‘Freepost Streetscene’.

Read the Council’s full analysis of these interim results: https://news.hackney.gov.uk/download/1035757/homertonlowtrafficneighbourhoodnovember2020trafficcounts.pdf