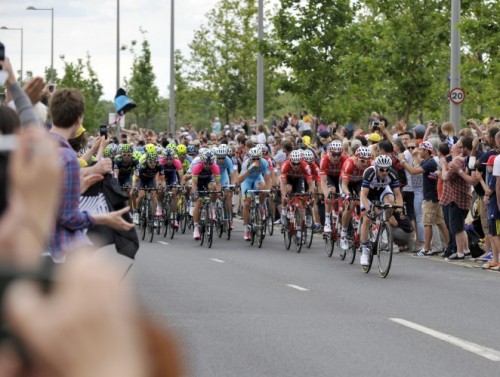 Hackney was gripped by cycle fever as the Tour de France sped through the borough on 7 July.

Thousands of spectators lined the streets to cheer on cyclists in the world famous race as they zoomed through Hackney just after 3.30pm on the way to a dramatic, and wet, sprint finish along The Mall.

The elite riders headed down Ruckholt Road, Eastway and Waterden Road in Hackney Wick, before racing through Queen Elizabeth Olympic Park and into central London.

Residents flocked to see their heroes in action, as the tour came to the UK for only the third time in history.

Oscar Serpell-Bell, eight, who is a member of Cycle Club Hackney, watched the race with his family.

He said: “Seeing the Tour in real life is really exciting. I want to be a professional cyclist when I grow up and Mark Cavendish is my hero.”

The pre-Tour publicity caravan arrived in Hackney at around 1pm, whipping up excitement in the crowd and handing out promotional goodies.

Moritz Steiger, 48, a photographer from Hackney Central, said: “The Tour is something I’ve always wanted to see, so I couldn’t miss the opportunity when it’s right onmy doorstep.”

The first three stages – known as the Grand Depart – of the prestigious race took place in the UK from 5 to 7 July, with the third section covering 96 miles (155km) and passing through Cambridgeshire, Essex, North and East London before finishing in Westminster.

Marcel Kittel of Germany crossed the line first in three hours and 38 minutes, after also winning the opening stage in Yorkshire.

Matt Bailey, Valerie Faulkner and their son Luc, from Stoke Newington, went to the Olympic Park to watch the race.

Matt said: “It was amazing, there was such a great atmosphere. We came here today because I’m a cycle geek, we love the Olympic Park and Val is half French – so we wouldn’t have missed it for the world!”

It was an absolute honour for Hackney to be able to host a section of the Tour, and I’m proud the community was able to give the riders such a warm welcome. It was exhilarating to know that the eyes of the world were turned upon us, albeit briefly, to see cycling’s top talent compete for the yellow jersey. We’re already London’s number one cycling borough and I hope the Tour will have inspired yet more of our residents to take to their bikes and get active.

Some 6,000 marshals and volunteers were on duty for the Tour, which has inspired a whole new generation of cyclists.