Thousands of Hackney pupils beat their own personal bests 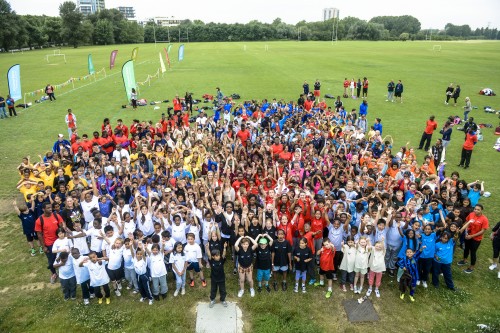 Nearly 2,500 Hackney pupils competed to beat their own personal bests in a borough-wide sports competition.

It was the sixth annual Personal Bests – the Council’s Olympic Games legacy, health and wellbeing project, which sees teams and individuals compete against their own personal bests. This year 40 local primary schools joined in and 500 young people took part in the finals at Hackney Marshes on 2 July.

Simon Marks primary school took the trophy for first prize after their team accumulated the most new personal bests at the finals. St John of Jerusalem came second, and Holmleigh third.

Whitmore school were the relay champions and the sprint challenge winners were Tyrell Joyce Sealey, of St John of Jerusalem and Chizoba Okoli, of St Scholactica’s.

The event was opened by Cabinet Member for Children’s Services and Education, Cllr Rita Krishna. Prizes were presented by the Speaker of Hackney Cllr Michael Desmond and special guest, Hackney Paralympian Dervis Konuralp.

Swimmer Dervis represented Great Britain at four Paralympic Games and as a teenager he represented Hackney at the London Youth Games.

Personal Bests is a great programme as the scoring method makes it fully inclusive, I really enjoy coming to the finals and its great to see a Games legacy in Hackney.

Cllr Krishna said: “‘It was uplifting to see the numbers of Hackney children all determined to do their personal best at these finals.

“I am particularly pleased that the Personal Best programme is a lasting aspect of our Olympic legacy. The programme began six years ago, ahead of the Olympics, and what we learn from the programme is a lesson for life. Specifically, that whatever the noise and advice there may be around you, it is important to be able to connect with that quiet place inside each of us from which we can do our very best.”

Thousands of Hackney pupils beat their own personal bests