The start of a Hackney sparkling Christmas 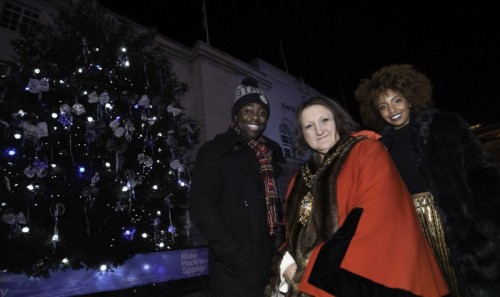 An audience of people from across Hackney welcomed the annual switch-on of the Christmas lights at the Hackney Town Hall this weekend.

With the Hackney Community Choir warming-up the crowd with festive tunes, Capital Xtra radio presenters helped build-up the anticipation with a switch-on countdown.

Speaker of Hackney, Cllr Sharon Patrick, switched on the festive lights to launch Make Hackney Sparkle 2014, a festive bumper-month of free entertainment and activities all listed in a free Hackney Today supplement that’s available in venues across the borough.

The Make Hackney Sparkle lights switch-on event also included the Hackney Cycle Sparkle competition, giving cyclists of all ages the opportunity to dress-up their bicycles, or themselves, with festive decorations. After much deliberation by the judges it was announced that the three main winners were Flynn Richards, 10, who won a new bicycle, Dylan O'Connor, 9, who won bike lights both courtesy of A&S Bicycles and Liyya Vesamia who won a reflective jacket courtesy of London Fields Cycles. The runner-up prize went to Louise Kerbiriou who won an introduction to bike maintenance class from London Bike Kitchen.

It was great to be joined by so many people, presenters from Capital Xtra and the Hackney Community Choir to see the switching on of the Christmas lights which look beautiful and really add to the festive feel of the borough. I would also like to thank all of the cyclists who took part in the Cycle Sparkle Competition, everyone looked great and put in so much effort to make themselves and their bikes sparkle.

You can find Christmas listings, offers and news by visiting Destination Hackney, by following @lovehackney on twitter and by using #MakeHackneySparkle. You can also view the full supplement by visiting the Make Hackney Sparkle website.

The start of a Hackney sparkling Christmas