The life and times of Lt Col Morriss, newly-appointed freeman of the borough 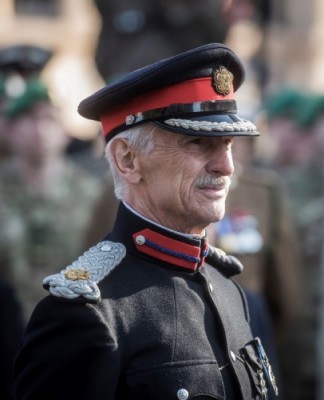 Lt Col Roderick Morriss, the Deputy Lieutenant of Hackney, may be one man but he’s packed in more in a lifetime than many could boast in three.

Last week the seemingly unstoppable 68-year-old was awarded Freedom of the Borough, Hackney’s highest and rarest honour, for not only his role as Deputy Lieutenant, a voluntary position, but also for his service to St John Ambulance, The Royal British Legion, Scouts, and the National Flood and Tempest Distress Fund, among others too numerous to list.

“I don’t believe anyone sets out to be involved in so many organisations,” said Lt Col Morriss. “However, every one of those jobs is a challenge and enormously rewarding. Each has its own specific idiosyncrasy and none are without peaks and troughs. However, when, as occasionally happens, everything goes right, then ‘God's in his heaven - all's right with the world’.”

Lt Col Morriss was made Deputy Lieutenant 16 years ago - a position which sees him ensuring the monarch is kept up-to-date with what’s happening in Hackney and in turn acting as the Queen’s representative during mayoral, royal or civic visits to the borough - and in that time he has seen Hackney “flourish”.

“Hackney has grown in pride and confidence,” he said. “It is the people that make a place and the people of Hackney have always been most engaging and welcoming.

“However, over the years, the governance and systems of Hackney have experienced a metamorphosis and Hackney can boast that it is as good as any London borough and better than most.”

His apparent tirelessness appears to be a recurring theme in his life since moving from his birthplace, in Calcutta, India - where his father had been in the tea business - to England where he began a job in what would turn out to be an illustrious career in the shipping industry.

Starting out as an apprentice engineer on the Teeside, the then 17-year-old rose quickly through the ranks and, whilst still in his ‘20s, was shaping international shipping policy within the UN. When he retired in 2002, Lt Col Morriss had created a Maritime Quality Code that would go on to be adopted by the world’s shipping heads.

As his civvy career flourished, so did a military calling. In 1971, he joined the 100 Medium Regiment Royal Artillery of the Territorial Army as a private. By 1989 he was in command - with 550 officers under him and oversight of £25 million of equipment. On his retirement Lt Col Morriss had risen to liaison officer in the Allied Rapid Reaction Corps, answering directly to Sir Mike Jackson, Britain’s highest profile general since the Second World War.

“I joined the Gunners because I did not fancy having to march too much or dig trenches, “ said Lt Col Morriss, “little knowing that as a Captain, a rank I attained after 10 years, I would have to lead an infantry company and dig as many holes as they.

“Although never seeing action, the role we practiced was defending the Inner German Border and we knew that our lives were going to be extremely short if push ever came to shove and whilst the politicians sought peace. I was blown up in Germany and shelled by my own troops on Salisbury Plain - I should have taken the hint! Neither was my fault.”

Despite rubbing shoulders with a long list of royals (the Queen is “delightful, kind and considerate”), advising world leaders, and reporting to one of the country’s top military men, it is his interactions with Hackney residents that Lt Col has most enjoyed.

“I am sometimes asked to officiate at Citizenship ceremonies. These are the most moving of occasions as new citizens swear allegiance to the Queen and their new country and give every impression that they are dedicated to make their new home and new country a better place for them and their families to live.”

But what of a home life? Well, that’s a story in itself: He met wife Susanna in 2006. After coming off a bend. Whilst tobogganing in Switzerland. As he pushed 60.

The life and times of Lt Col Morriss, newly-appointed freeman of the borough