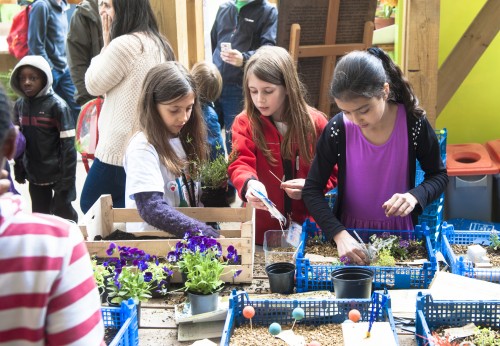 Dalston’s first children’s festival is gearing up for a jam-packed programme of summer holiday fun.

The community-led festival launched in May with creativity being the key driver and to showcase all the area’s places and spaces for children and families to enjoy from Dalston's Eastern Curve Garden and the Evergreen Adventure Playground to Gillett Square.

Since the festival opened, spectacular events have taken place across the town centre, including: making a Dalston-hipster scarecrow and pothole gardens, playing 80 games from around the world, scavenger hunt, climbing wall, outdoor film screenings and custard pie fight.

There has also been a performance by Mimbre Acrobats’s Youth Group in Dalston Square, waffle-making with the team from Rita’s Bar and Diner in the Eastern Curve Garden and experimenting with a giant visual illusion at Dalston House, an extraordinary temporary art project by the artist Leandro Erlich in Ashwin Street.

Ten children from Colvestone and Rushmore primary schools took part in a journalism club - the Hackney Wow Cubs - and they have been reviewing the festival. You can read their reviews online hackneywow.co.uk/cubs.

“Table tennis at Gillett Square was energetic. I played tournaments of six games versus different people. Michael’s dad played extraordinarily well for an old person.  I recommend all Hackney people, who love having fun, to go to this free event.”
Anna Ngyen, 8 years, Hackney Wow Cub

“The miniature gardens are awesome.  I found it so exciting because I got very competitive.  You can get a tray and come up with your own tiny garden.  You can make sheds and plant tiny plants.  You can even make them at home.  It is in the Dalston Eastern Curve Garden.”
Kitty Cox, 9 years, Hackney Wow Cub

Dalston Town Tales
Author Encounters for children. Workshops and talks from well-known children's authors and illustrators.  Fold-out book writer and artist Nick Denchfield, will show children how to make their own pop-ups and author David Lucas will teach adults tips on how to invent their own magical children's stories. Plus music from Mrs H and the Singalong Band. More famous-name authors to be announced soon.
Dalston CLR James Library, Friday 30 August, 11am-5pm

Total Play Days with Universal Board Games
People and families of all ages can come along and play games from around the world and younger children can explore the snug and outdoor play equipment.
Gillett Square, Sat 17 August (1-5pm) and Wed 21 August (4-6.30pm)

‘Dalston House’ installation by artist Leandro Erlich
Internationally known for his captivating, three-dimensional visual illusions, Argentine artist Leandro Erlich has been commissioned by the Barbican to create a new installation in Dalston. Resembling a movie set, the detailed facade of a Victorian terraced house – recalling those that once stood on the street – lies horizontally on the ground with mirrors positioned overhead.
Ashwin Street until 4 August (11am-6pm Mon-Wed / 11am-8pm Thurs & Fri / 10am–8pm Sat & Sun)

Table tennis coaching
Any age and ability are welcome to come down and try their hand at the sport.
Gillett Square, every Wed (5-7pm) and Sat (2-4pm)

Art Wednesdays
Children aged 5 – 12  can join in free artist-led workshops, inspired by the plants, wildlife and surroundings of the garden.
Dalston Eastern Curve Garden, every Wednesday 2-4pm, from 31 July until 28 August

Festival closing celebration
The  closing celebration will include events across Dalston on 31 August including Gillett Square, Dalston Eastern Curve Garden and Dalston Square, 12-5pm.  Activities include the Anorak Summer Fete in Dalston Square with colouring walls, kids bingo hall and more traditional elements such as hopscotch, tug of war and a teddy bear’s picnic. Also, the Poetry Takeaway, an old burger van staffed by poets, will ‘cook up’ poems just for you.

For detailed listings and other information about the festival please visit: