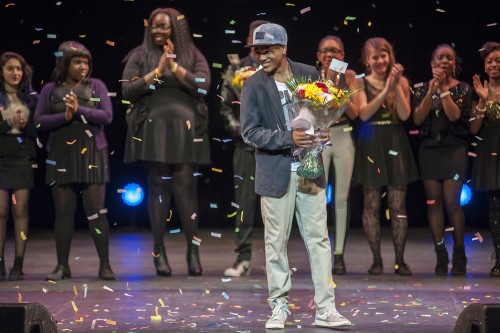 The winner of Hackney's biggest talent show was crowned in front of a packed out audience at the Hackney Empire last Friday, 7 February.

Spoken word artist Di-Andre Ebanks Silvera, 13, wowed the audience and judges at the Alter Ego finals with his performance, 'Dare You'. A powerful message about young people in modern society.

Di-Andre said: "It hasn’t fully sunk in yet, but it has left me lost for words because of the people I was up against, like Warren and the Young Brasscals, they were really good. Hopefully I get to do more shows like this in the future.”

Past Alter Ego contestants include Jermaine Jackman who is currently competing in BBC's The Voice.

Eight acts performed in the contest, which was hosted by Kat B (MTV Base) DJ Louis Subsole with performances from X Factors Misha B, Hackney born rapper, J Spades and Alter Ego 2013 winner Emily Numutaako, better known by her stage name, Emily Grace.

Misha B said: “The children are the future, even though I’m 21, there are more generations to come, that I need to make room for and giving back and talking to them about my experiences is only going to better them. I know a lot of them want to be singers, rappers, musicians, dancers, being in the entertainment industry I just feel I can help.”

The winners were selected through a 50/50 combination of text votes by the Alter Ego audience and nominations by the judging panel made up of Voice 2013 contestant Matt Henry , music producer, Bless Beats and MTV, BBC presenter, Jasmine Dotiwala and Hackney Empire’s Susie McKenna.

The finalists were selected following an X Factor style contest earlier this month.  Around 40 performers aged between 13 and 21 took to the stage to deliver a variety of different entertainment including acting, singing, rapping, dance and comedy in the hope of making it through to the finals. The public were also able to view the contenders online and vote for their favourite.