Spanish teaching in Hackney schools is an example to others 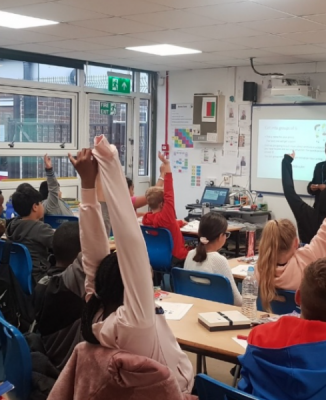 An innovative model of Spanish teaching in Hackney schools has been hailed as an ‘important case study’ for teachers around the world looking to embed language learning in classrooms and beyond, according to an independent report.

Hackney Council rolled out a new method for teaching Spanish in primary and secondary schools nearly eight years ago, called the Hackney Languages Initiative, in order to increase the take-up of languages in KS4 and KS5 and improve students’ results.

The unique aspect of the Hackney method - which has not happened anywhere else in the country - was the decision that all schools would teach the same language at primary and secondary level, ensuring a seamless transfer between settings and that pupils would continue to learn the same language.

Parkwood Primary School, in Queens Drive, has recently been recognised as an International Spanish School by the Spanish Embassy as a result of its Spanish work across the curriculum.

A report evaluating the impact of the Hackney project has hailed it a success, stating it ‘has had a significant impact on language learning in Hackney, and, in some cases, on the culture of local school communities beyond the classroom’.

It concludes: ‘This dedication to seeing a modern foreign language taught requires support from senior leaders, in the form of time, curriculum space and resources. Where these are available, that language can become part of school culture: a language, rather than a curriculum subject, to be used throughout the school and beyond it. This initiative therefore provides an important case study for any borough or education authority wishing to embed language learning in its schools.’

The report, funded by the Language Acts and Worldmaking Project, was presented to the education community, from as far away as Greece and Spain, yesterday (Thursday 18 March) by Cathy Baldwin, from the Open University and Ana de Medeiros, from King’s College London.

Hackney is a diverse and inclusive borough that values the many languages that are spoken and taught in our schools. The celebration of our rich language culture in Hackney is an important part of our inclusive approach as a borough.

A culture shift has taken place in the perception of the importance and accessibility of language learning for all.

A range of our family of schools in Hackney have been involved in this project, demonstrating how committed everyone is to working together for the benefit of Hackney children.

Spanish was chosen as the lead foreign language to be taught in Hackney when it became a government requirement to teach a language in primary schools in 2014, but students are also offered a wide range of other languages at secondary level, including French, German Italian, Mandarin, Arabic, Polish, Portuguese, Turkish, Latin and Modern Hebrew.

The report showed that language entries for GCSE in Hackney have already increased in Spanish by 20% between 2017 and 2020 and A-level entries have increased by 88%.

Spanish teaching in Hackney schools is an example to others
Newsroom