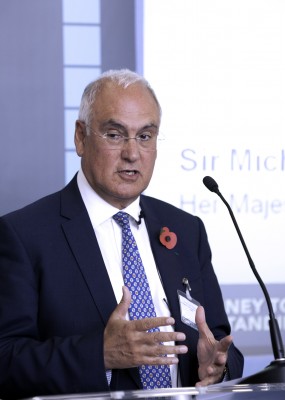 Sir Michael Wilshaw called for headteachers to take back control and assert their authority over pupils, when he spoke to a conference of senior leaders in Hackney.

Sir Michael was a guest speaker at Hackney Learning Trust’s Journey to Outstanding conference, which saw delegates from across the country gather to find out about how improvements were achieved in Hackney schools over the last decade.

The head of Ofsted reflected on his time in Hackney, where he worked in the 70s before returning and becoming the principal of the country’s first academy, Mossbourne Community College.

He said that strong leadership is vital in building outstanding schools and cited political leadership and local authority support as a key factor in Hackney’s success.

He called on headteachers to reclaim their role as authority figures: “Some teachers simply will not accept that a school isn’t a collective but an organisation with clear hierarchies and separate duties. While it’s true that we all share a common purpose, our responsibilities are not the same.

“There is absolutely nothing wrong in my view in saying to youngsters: ‘Do as I ask because I am the adult, I am older than you, I know more than you and - by the way - I am in authority over you’.”

He also raised the possibility of school governors being paid and called on them to make brave decisions, particularly when appointing headteachers.

Sir Michael’s predecessor Sir Mike Tomlinson, who is the former chair of The Learning Trust, also spoke at the event, which was held at the Hackney teachers’ centre named after him, the Tomlinson Centre, on 7 November.

Among the delegates were around 30 teachers from Suffolk, which has partnered with Hackney as part of their improvement programme, Raising The Bar. They also heard from Hackney’s Director of Education, Tricia Okoruwa, and Head of Early Years, Angela Scattergood, before taking part in a series of workshops led by members of staff from Hackney.

In 2002, The Learning Trust was given a 10 year contract to improve education services on behalf of the London Borough of Hackney. This was the first private, not-for-profit company in the UK to take over a local authority’s entire education function.

The contract ended in 2012 and The Learning Trust became Hackney Learning Trust, incorporated into the borough’s local authority. Hackney is now regarded as a borough with rapid improvements, sustained achievements, best practice and innovation in education.

Find out more at www.learningtrust.co.uk