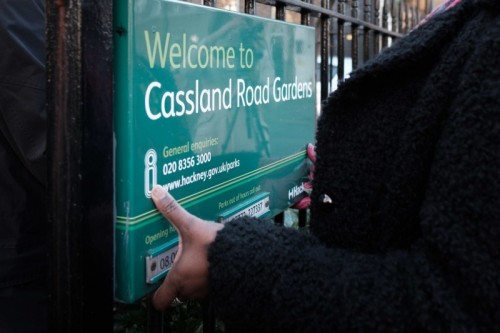 Four new names have been shortlisted to rename the green space formerly known as Cassland Road Gardens and residents are now invited to vote for their favourite.

Since the announcement of the renaming of the gardens in July 2020, submissions have been sent in by local residents keen to help make history.

The gardens are being renamed as part of the Council’s Review, Rename, Reclaim project which is reviewing the names of local landmarks, streets, buildings and public spaces to ensure they reflect the long history of Hackney’s diversity.

The community steering group involved in the project, local councillors and the Mayor of Hackney, have now whittled down the list and have launched a public vote between Celestine, Crowley, Owuasu or Straker Gardens. Each of the four names reflect a hidden story of an influential individual in the multicultural history of Hackney.

Residents within the Cassland Road area will be sent a letter from the Mayor along with a consultation pack containing information on Sir John Cass and the histories about the potential new names. They will also be invited to two online community sessions.

Cassland Road Gardens was named after Sir John Cass – director of the Royal African Company who made profits from the enslavement of African people in the 16th and 17th centuries. The former Cassland Road Garden sign now lives in Hackney Museum as an educational artifact.

“Since the launch of Review, Rename, Reclaim, we have been on an insightful journey into the often hidden history of Hackney. Suggestions from local residents, and strong direction from our Community steering group, have been enlightening and educational and we are grateful to everyone who’s taken part.

“This is the first location to be renamed as part of the review and it already feels like a step in the right direction as we make our public places more inclusive to the community who live here today. We look forward to seeing who Hackney decides to name their garden after.”

Short histories on each of the shortlisted names are below. More information can be found online at hackney.gov.uk/naming-review

S.J. Celestine Edwards (1857/1858 - 1894) - Dominican-born activist for social justice and influential lecturer, speaking throughout the country. He studied theology at King’s College and medicine at the Royal London Hospital and lived in Hackney from 1891.

Kathleen ‘Kit’ Crowley (1918-2018) - a Cassland Road resident born in 1918 who contributed to the WW2 effort by working on the railway as a porter and spent 32 years working at Wentworth Nursery. She is described as a role model for the children of the Windrush generation on Gascoyne Estate.

Francis ‘Frank’ Owuasu (1954 - 2018) Frank came to Hackney in 1967 from Nigeria as a political refugee. In response to educational underachievement of African and African-Caribbean children, he founded the African Community School with his wife Kome.

Ralph Adolphus Straker (1936 - 2013) - an influential campaigner for racial equality. He moved to London from Barbados in 1956 as a recruit for London Transport and helped reverse the educationally “sub normal” classification of many Caribbean children at the time. In 2002 he was appointed an OBE for his works in community relations.

Residents can cast their votes until 11 April.

An online focus group for Hackney young people will be held on 22 March at 5.30pm. Sign up now.

To find out more about Review, Rename, Reclaim visit hackney.gov.uk/naming-review

For more news and press releases on the renaming of Cassland Road Gardens, visit the Hackney Council newsroom.

Residents are invited to suggest names for future renaming projects via the new Hackney Naming Hub hackneynaminghub.commonplace.is Suggestions can also be submitted by calling 020 8356 4501 or emailing NamingHub@hackney.gov.uk