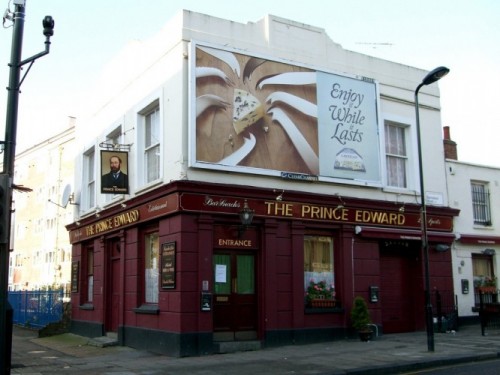 Built in 1886, The Prince Edward in Homerton’s Wick Road has been used by the borough’s pub-goers for generations and is renowned for its Caribbean, soul and Irish music nights and a warm community atmosphere.

The Asset of Community Value (ACV) status awarded to The Prince Edward this month adds an additional layer of planning protection to the historic landmark, meaning the owners would not be permitted to sell the pub without first offering community groups the chance to purchase it.

This latest news follows a determined campaign by the local community group The Friends of the Prince Edward who in 2012, rallied against the developer owner of the property after plans were submitted to demolish and transform the pub into residential flats. The Council refused the planning application noting the social and cultural importance of the public house as key reasons for the ruling amongst other planning policy grounds.

The Prince Edward follows in the footsteps of the Chesham Arms pub that was given ACV status in 2013 and a subsequent Article 4 Direction this year, one of only a handful of pubs in the UK given this additional layer of planning protection. After closing in 2012, the 150-year-old Chesham Arms is now planning to reopen as a traditional East End public house.

Pubs play an important role in the daily life of communities and a local economy. Once these spaces are lost to other uses it is very rare to see a return to their original purpose. There is little doubt in Hackney that we are experiencing a renaissance of the local pub, a new generation of entrepreneurs recognise the opportunity and the importance these buildings present. The swift response from the Friends of the Prince Edward group for applying and being awarded the Asset of Community Value status is an important step towards securing the future of this Hackney pub.

With so many pubs closing locally and across the UK that are no longer being able to cater to the local community, its great news that The Prince Edward has been given this planning protection from the Council.

The Prince Edward is a decent, affordable and well attended local boozer, with a great atmosphere that caters for all areas of the community both young and old. There aren’t many pubs like this left that provide people a comfortable and affordable space outside their living room to meet and socialise with friends and family. We’re determined to keep the historic Prince Edward open for everyone today and for the local community to use in the many years ahead.

Josh Clarke from the Friends of the Prince Edward group
„