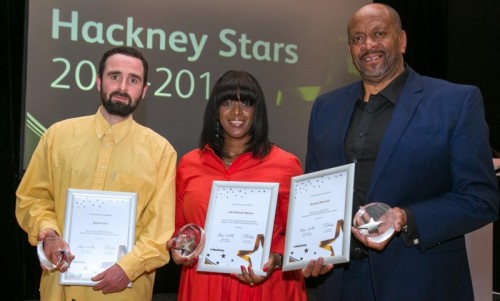 Richard Mitchell, from Haggerston School, Donal Friel, from London Fields Primary School and Jaki Walcott-Nelson, from Clapton Girls Academy were chosen by a judging panel from nominations sent in by colleagues, pupils and parents for the positive impact they have had on students.

The awards, now in their second year, recognise everyone that contributes to school life in Hackney – from teachers to caretakers, cleaners and cooks – and without whom educational achievement would struggle to reach the high standards that now exist in the borough.

Richard Mitchell, Behavior Support Officer won the School Star Award. He was nominated by a colleague for his work supporting and raising the aspirations of students who are labelled as having challenging behaviour, working closely with students to help them overcome difficult circumstances. Richard was commended for giving up his free time to work with young people outside school, in the community, using his Fridays and Saturdays to coach young people in football.

Richard said: “With a great team, good things can be achieved.”

Donal Friel, Year 1 Teacher won the Teacher of the Year award was nominated by three parents for his kindness, empathy, generosity of spirit, and love of teaching.

One parent wrote about their personal journey fighting cancer, which they knew was difficult for their children, Mr Friel went above and beyond to ensure the children had someone to talk to and made sure they felt safe and cared for. He also checked in on the parent and was a real source of support for the family even after the children had moved on from his class.

Donal Friel said: “I think it's really great but it is not just me, it’s everyone that I work with not just teachers, teaching assistants, children and the parents themselves make this award what it is for me.”

Jaki Walcott-Nelson, Whole School Behaviour Lead, won the Schools Lifetime Achievement, she was nominated by colleague for her 20 years of dedication to Hackney children through her different roles at Clapton Girls Academy.

Jaki has helped a whole generation of Hackney students, and was commended for the extra support she gives to pupils, working with parents and families to ensure all young people are able to achieve their best in school.

Jacki said: “It's a real honour to win this award on behalf of myself and my team, support staff don’t always get recognised but we go above and beyond everyday to support the teachers and the students.”

The at Hackney Town Hall was hosted by comedian and presenter Kat B alongside the Mayor and Deputy Mayor Cllr Bramble. The night also paid homage to Council workers as different members from different departments won awards for the work and service they provide for Hackney residents.

Having the Hackney School Stars Awards is a great way to recognise and celebrate all the hard work and achievements made by staff in Hackney’s schools and I was very happy to introduce the awards last year.

The school community work tirelessly everyday to achieve great results and a rich curriculum within our schools as well as provide support to children and families. Here in Hackney we provide some of the best schools in the country, this wouldn't be if it was not for the teachers, teaching assistants, cooks, caretakers and administration staff to name a few. They truly deserved to be thanked for all the hard work they do.