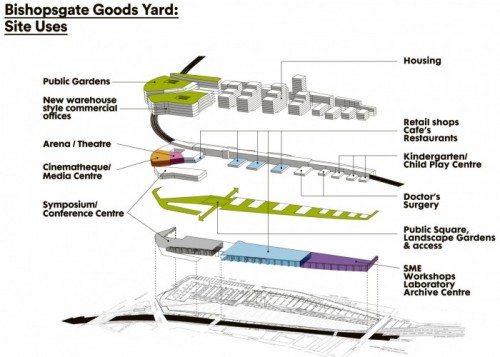 The Mayor of Hackney has launched a campaign against a 48-storey luxury development, which threatens to plunge Tech City into darkness.

Mayor Jules Pipe warns that the proposal by Hammersons – which has the backing of the Mayor of London – threatens the unique character of Shoreditch and could lead to the loss of thousands of local tech and design jobs, as firms abandon this growing cluster.

The two high rise towers will stand at up to 48 floors, just shy of One Canada Square at Canary Wharf. Mayor Pipe is concerned that the height will have a detrimental effect on neighbouring businesses and the character of the area.

Mayor Pipe said: “These towers would stand almost as tall as One Canada Place at Canary Wharf; that might be OK for the City, but it is completely out of scale for Shoreditch. These luxury flats, which are well beyond the reach of ordinary Londoners, will cast a shadow over the whole of Tech City, and threaten to damage the local, creative economy.

“Luxury accommodation does nothing to help London’s housing crisis and brings no value to Tech City, and we fear that such a major development will strip the area of its character, potentially leading to the dissipation of this growing cluster.”

The Council has worked with a local firm of architects to produce an alternative, viable scheme, which would be more in keeping with the area and provide much needed employment space. Despite this, the Mayor of London has indicated that he supports Hammersons plans so he may well intervene in the matter.

Mayor Pipe added: “I’m not opposed to tall buildings in principle, but they need to be in context. The ones proposed by Hammersons for this site are far too big, too close to the road and will compromise the areas’s distinct character and economic eco-system.

“The repercussions of this development could be so severe that they lead to the fragmentation of the local cluster of design and tech firms, leading to the loss of thousands of local jobs, and damage to London’s reputation as a global leader in these industries.

“I am writing to businesses and residents throughout Tech City to alert them to these plans and to urge them to write to the Mayor of London, asking him to withdraw his support for these damaging plans.”