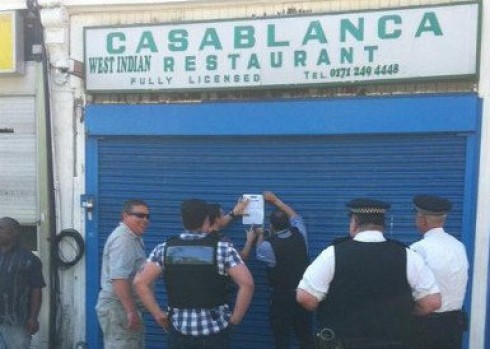 A restaurant that caused years of misery for neighbours living nearby has been ordered to close.

Casablanca, 170 Sandringham Road, E8, was the subject of complaints from residents who reported anti-social behaviour taking place in and around it. The complaints included people dealing class A drugs and cannabis at the premises and noise from a night club that was operating from its basement.

In response to these concerns, the Council and Hackney Police executed a warrant on 10 July, with Police seizing Class A and B drugs. Three people were also arrested. Further enquiries relating to other offences are ongoing.

Hackney Council and Police worked with neighbours to obtain evidence before attending Thames Magistrates’ Court on Monday 4 August, where they were granted a premises closure order.

The property has now been secured and anyone trying to gain access during the closure period will be in breach of the order, and could be fined up to £5,000 and/or six months imprisonment. The closure order will stay in place until 4 November 2014.

The owners of Casablanca and its customers have, for a number of years, subjected people living nearby to regular bouts of anti-social behaviour, which was absolutely unacceptable. With the help of statements from residents and joint work between Neighbourhood Policing Teams and the Council a successful case was put together. I’d like to thank residents for their help and co-operation.

Detective Sergeant Green Preston, from Hackney Police said: "This recent judgement is a victory for all those officers and partners whose efforts have directly contributed to the closure of an establishment that attracted unwanted activities. I am pleased to be part of the team who have helped to improve the situation for the local residents."