Residents urged to be aware of scam letter 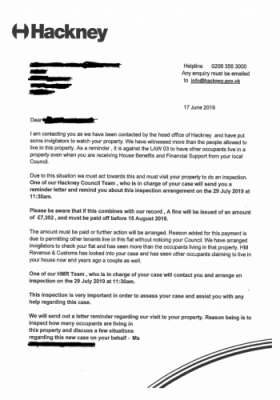 Hackney Council is aware some council residents have received a scam letter claiming to be from the council.

The letter says that council officers have been watching the household and infers that residents are illegally subletting. The letter states that a fine of several thousand pounds is owed by the resident and says council officers will return to the property at an arranged time to inspect it. This letter is bogus, and appears to be a fraud attempt. The council will never ask residents to give its officers cash payments to resolve breaches of tenancy and lease conditions.

If any resident receives this letter, or one similar, the council asks them to report it to Action Fraud on 0300 123 2040.

The council also strongly urges residents to not answer their door if someone turns up at the date set out in the letter and to call the police immediately on 999.

Residents urged to be aware of scam letter