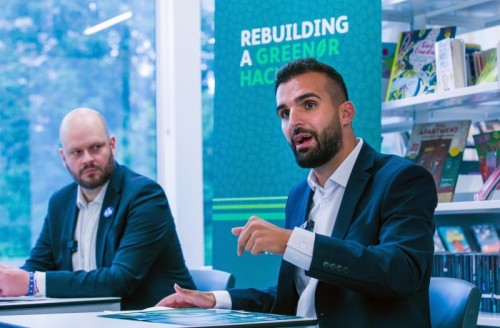 Mayor of Hackney, Philip Glanville, and Cabinet Member for Energy, Waste, Transport and Public Realm, Cllr Mete Coban reflect on last week's green recovery community engagement event, what they heard at the event and how this will be taken forward after COP26.

As we approach COP26, the UN International Climate Conference, next week, we look to the UK Government and international leaders to reach agreement on the challenge of our times: tackling irreversible climate change.

Hackney is playing its part - with the Council committed to reaching net zero emissions by 2040, meaning that we will not be a net contributor to climate change by that point. Residents in the borough already have some of the lowest per capita emissions of anywhere in the country too, but we can’t afford to be complacent.

This action to rebuild a greener Hackney is having a transformative effect. Thousands of new trees are making the borough greener, tens of School Streets and low traffic neighbourhoods are helping people to walk and cycle more, Council services are powered by 100% renewable electricity and our solar programme is helping to reduce emissions. As we go further in our action to reach net zero, we can expect to breathe cleaner air, live in better neighbourhoods, see exciting new green jobs and lead healthier lives.

It’s important to note that the Council’s emissions form a small but significant part of emissions in the borough, with most coming from household-based emissions, such as energy, aviation and food consumption.

That’s why the incredible work so many local residents are doing to reduce emissions, recycle more and encourage biodiversity is really important too.

To that end, last week we partnered with local community organisations to host a green recovery engagement event - focussed on three key themes: what a green recovery from the pandemic means to people; how we ensure it is fair and does not cause greater inequalities; and the part community groups can play in the green recovery.

This event was codesigned with local community groups to kickstart a longer-term conversation and build a local coalition to fight the climate crisis.

We heard from representatives from lots of organisations, including: Hackney’s resident liaison group; Sustainable Hackney; Growing Communities; and Daubeney Fields Forever. With so many of you speaking passionately about the work we can do together, there were lots of key themes that you discussed. Among many other topics raised, we heard that:

We also heard about the appetite among our community groups to kickstart deeper and longer term engagement to tackle the nature and climate crisis together. On the ground, you also want to see more co-production and investment in the circular economy and community-based solutions, an incredibly welcome point that we continue to make to the Government.

We’ll now be analysing the comments made by group participants, holding more engagement events, reflecting on the outcomes of COP 26 and producing a report, which will go to the Council’s Cabinet next year.

Together, we can rebuild a greener Hackney.