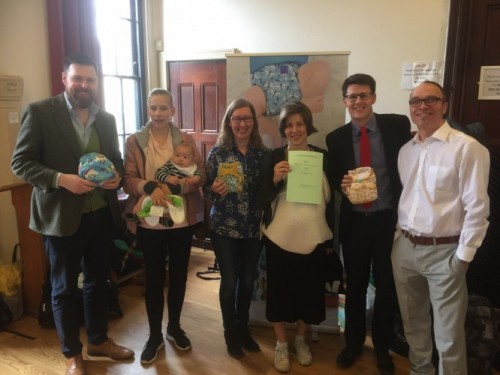 A Nappy (Environmental Standards) Bill  was launched this week at a Hackney Real Nappies Network event at the Round Chapel in Clapton.

The Bill is being brought forward by David Linden MP and is supported by local MP Meg Hillier, and alongside a system wide change in nappy manufacture the Bill contains an incentive for local authorities across the UK to provide reusable nappy vouchers and more information for parents.

My wife and I used the Real Nappies for London scheme to obtain modern, cotton nappies for both of our children, which we found convenient, far less likely to cause nappy rash, and simple to clean. The Hackney Real Nappy Network was also great at providing advice on how to get the best out of real nappies. When we no longer needed them, we were even able to donate our nappies back to the Network to be used by other parents.

As the world increasingly seeks to address environmentally ruinous consumption, and Council’s grapple with the increasing costs of waste disposal, a return to real nappy use is one of the many ways we can tackle these pressing issues whilst also making life easier for parents, saving families money, reducing plastic waste. Hackney will continue to support the use of real nappies, and hopes to contribute to an increase in their popularity across the borough and beyond.

Find out how to claim your £54 real nappy voucher, where the next real nappy event is being held, and more information switching to real nappies visit: www.hackney.gov.uk/nappies