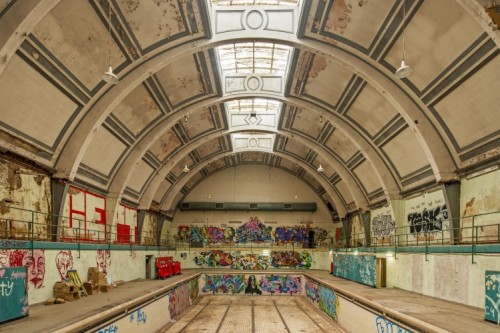 A brewery, a theatre, a hotel, a swimming pool and homes are just some of the many ideas being proposed for Haggerston Baths by those interested in leasing the iconic building from Hackney Council.

The Council sought expressions of interest in the 111-year-old Whiston Road building, in June, attracting 29 bids from a range of individuals, firms and developers. They are now in the process of creating formal proposals.

The public meeting is being held on Thursday, 8 October at the VLC Community Centre, next door to the baths at 7pm. The expressions of interest and other information about the pool will be available to view at the centre from 6pm, or they can be studied online now.

The meeting will ask those attending to comment on the draft proposals; make suggestions about the building's use based on these ideas; and suggest what the Council should prioritise when making its decision about the baths’ future. The feedback will be also be passed on to the bidders to help shape and refine their formal propositions.

Cllr Jonathan McShane, Cabinet Member for Health, Social Care and Culture; a speaker from the Haggerston Pool Community Trust; and Chris Pritchard, Assistant Director of Property Services at the Council will be speaking at the meeting. The chair will be Mike Coysh from the Trust.

The Council is currently seeking redevelopment of the site in light of the baths' annual approximate £100,000 upkeep which covers maintenance and security.

It is estimated that it will cost around £25million to make the building safe and bring it back into public use; resource the Council is currently unable to prioritise in view of ongoing government budget cuts.

The pool complex, which opened in 1904 and closed to public use in 2000, is included in the Victorian Society’s list of the most endangered Victorian and Edwardian buildings in England and Wales due to its cultural and architectural significance.

If you would like more information, or are unable to make the meeting and would like to comment on the proposals, you can contact: Liz Hughes from Haggerston Pool Community Trustlondonpools@gmail.com on: 077 7300 2646, or David Mitchell at: david.mitchell@hackney.gov.uk