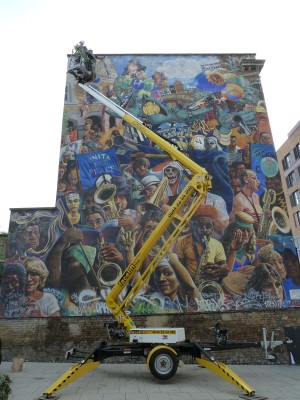 Hackney Council has announced plans to preserve and restore the Dalston Peace Carnival Mural following damage caused by vandalism and exposure to the elements.

The mural, which has become a local landmark and featured on the cover of Rudimental's number one album 'Home', is painted on render at the side of a building on Dalston Lane and is in danger of coming away from the brickwork unless preservation works are carried out.

Artist, Ray Walker, was commissioned by the GLC in 1983 to design a mural to celebrate 'Peace Year', it shows the Hackney Peace Carnival which took place in the same year and depicts both the celebration of peace and many threats to peace at that time. Walker also worked on the 'Battle of Cable Street' mural in Tower Hamlets.

Independent experts Hirst Conservation have produced a report on how to restore the mural and reattach the render to 15 Dalston Lane and have appointed painter Paul Butler who worked with Ray Walker on the original Battle of Cable Street mural and was recently involved in its restoration.

Having worked with Ray Walker, Paul Butler has direct experience of the techniques used and the special Keim paint which was used for both the original murals and recent restoration. Anna Walker praised his involvement in plans to restore the Dalston Peace Carnival Mural, she said: "Paul has a unique knowledge of the Keim paint process and mural renovation and repair and is a highly talented mural painter. He is therefore the artist who I and my son, Roland Walker, wish to repaint the mural."

After repairs to the render are complete the mural will be cleaned, repainted and protected by a coating designed to make the removal of graffiti easier.

Dalston Peace Mural is an important local landmark, which has stood up to the test of time pretty well. These works will help to extend its life and to restore patches of damage so that it can be enjoyed for years to come. We're very pleased to be able to involve Paul, who was a contemporary and friend of Ray Walker, and Hirst Conservation who have valuable experience of preserving and restoring frescos, murals and artworks all over the UK.

Residents have been invited to hear more about the restoration and discuss the plans at the Dalston Ward Forum at 7pm on 3 March at Dalston CLR James Library.