People urged to speak out to save heart of Shoreditch 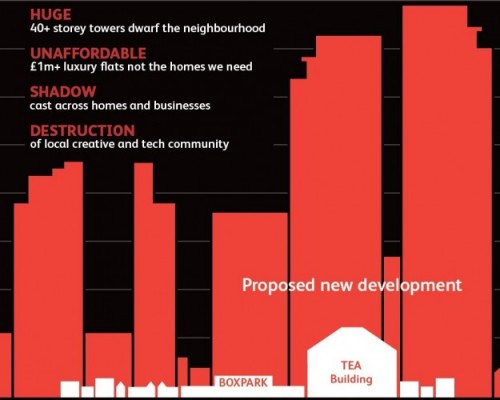 Residents and businesses are being urged to have their say on proposals for huge luxury apartment blocks in the heart of Shoreditch, before it’s too late.

The Hackney side includes the two tallest towers – 47 storeys (178m) and 39 storeys (152m) – with the other buildings across the site ranging from 31 storeys to seven, and comprising mainly of apartments.

Yesterday, both Hackney and Tower Hamlets councils held special planning committee meetings to discuss the applications. Both voted for refusal. In Hackney, there were 12 points of objection, the main issues being:

However, because, at the request of the developers, London Mayor Boris Johnson decided in September to take over the application, the councils’ ‘refusal’ does not mean it won’t go ahead.

The decision now rests solely with the Mayor of London, but people can email or write to him expressing their views and these will need to be considered as part of the planning process. He is expected to rule early next year.

The shoddy, downright misleading viability assessment on which the developers base their case has now been exposed. Although they claim to owe the community no affordable housing and offer a paltry 10% out of “goodwill”, the independent study by BNP Paribas found more than 30% on site with a further £12 million towards off-site provision would be viable. It identifies ‘distortion’, ‘double-counting’ and a ‘lack of transparency’ throughout the developer’s assessment, argues they have ramped up their costs and downplayed profits, and predicts our communities would be short-changed by the current S106 money being offered.

“These proposals, based primarily on cashing in on luxury flats way beyond the means of most Hackney or Tower Hamlets residents, are wholly inappropriate for this part of Shoreditch and not what either borough needs.

“There is so much potential for Bishopsgate Goods Yard to be developed in a creative way which works for the benefit of everyone, and provides commercial space which allows the area’s thriving tech and creative sector to continue to grow.

“As it stands, this scheme will serve primarily to line the pockets of developers and property investors and is an example of everything that is wrong with the capital's property and development market.

“The residents and businesses of Hackney and Tower Hamlets deserve better, and I hope it’s with their interests in mind that the Mayor of London makes his decision. I’d urge everyone who opposes these proposals to send him an email or letter, it could be their last chance to protect the heart of Shoreditch.

Anyone who wishes to object to the Mayor of London can email him on mayor@london.gov.uk

For more information on/pictures of the development and the planning process going forward, visit the Bishopsgate Goods Yard application section on our website.

Scroll through images below using arrows in right corner. Click an image to enlarge it.

People urged to speak out to save heart of Shoreditch