People of Hackney pay their respects on Remembrance Sunday 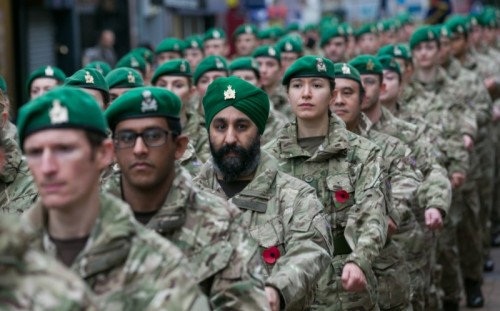 On Sunday 14 November Hackney residents joined ex-service men and women to remember the fallen at the borough’s Remembrance Sunday parade and church service.

The Speaker of Hackney, Councillor Michael Desmond, helped lead the procession of around 200 from the Town Hall to St-John-at-Hackney Church to honour those who gave their lives in the line of duty in the 107 years since the outbreak of the First World War.

The parade was accompanied by somber music from the Jewish Lads and Girls’ Brigade band - with people of all faiths and backgrounds gathering to take part in the event, including representatives from Ex-services association, Reservists, Sea, Army and Air Cadets, Scouts, Guides and police.

After the march, with the arrival at the church, the Speaker laid a wreath at the Cenotaph to commemorate those who lost their lives during military service and faith leaders from across the borough gave readings, before all paid their respects during the two minutes' silence.

Reverend Al Gordon led a moving church service attended by hundreds of people including the Mayor of Hackney Philip Glanville and local Hackney MPs Meg Hillier and Diane Abbott. The parade then made its way back to Hackney Town Hall for traditional march-past and salute.

The Remembrance Sunday Service was a very moving occasion. It was heartening to see so many people come together to pay tribute to our fallen service men and women - who made a great sacrifice in the World Wars and all the conflict since. They must not be forgotten.

See more images of the event on the Council Flickr page.

People of Hackney pay their respects on Remembrance Sunday