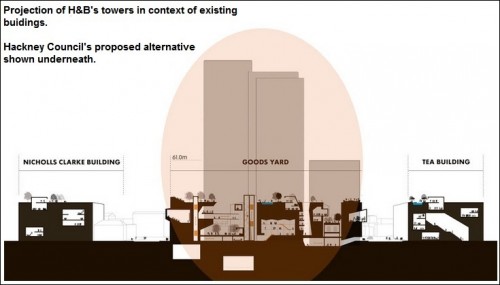 At the request of developers Hammerson and Ballymore, London Mayor Boris Johnson has agreed to ‘call-in’ their application for a luxury high-rise development at the Bishopsgate Goodsyard site in Shoreditch.

This means he, and not Hackney and Tower Hamlets councils, will now decide on the application.

I am disgusted at the decision to call in this development to City Hall for determination. It shows outrageous disregard for the local democratic planning process and demonstrates complete contempt for the residents and businesses of Hackney and Tower Hamlets.

“Hammerson and Ballymore’s latest proposals received in August are little more than superficial tinkering to the application submitted last year and remain wholly inappropriate for this part of Shoreditch, making no real attempt to meet Hackney’s housing or business needs. The buildings are still far too high and there remains an unacceptable lack of affordable homes. The amount and type of proposed commercial space also brings no value to Tech City and could actually lead to the dissipation of this growing and increasingly renowned cluster of design and tech companies, as it changes the feel and direction of the area.

“The developer’s arguments to the Mayor of London requesting he call it in were misleading and extremely cynical, and it appears that this was their strategy all along. In no way have Hackney’s or Tower Hamlets' planning departments failed in their duties in the treatment of this application. Instead, they’ve tried very hard to work constructively with the developers to make them understand how they could make an appalling proposal more acceptable in terms of design and impact on the two boroughs. There is so much potential for Bishopsgate Goodsyard to be developed in a creative way which works for the benefit of everyone.

"Calling-in this shabby proposal will now allow City Hall to give it the green light, while pointing to some minor amendments they might secure following some cosy chats with the developers. You can be certain that it will not be local residents and businesses that will be on their minds when they do.  As it stands, this scheme will serve primarily to line the pockets of developers and property investors and is an example of everything that is wrong with the capital's property and development market.

“We will now assess our options going forwards to ensure the full weight of public opinion against this disastrous development is clearly demonstrated to the GLA.

Earlier this year the Mayor launched an online petition against Hammerson and Ballymore’s original application for the site, which included two residential towers standing at 47 and 43 floors containing mainly expensive, luxury flats. It received almost 3,600 signatures.

The Council has worked with a local firm of architects to produce an alternative, viable scheme, which would be more in keeping with the area and provide much needed employment space (illustrated in the image above, click to enlarge). Little of its proposals have been taken on by Hammerson and Ballymore.