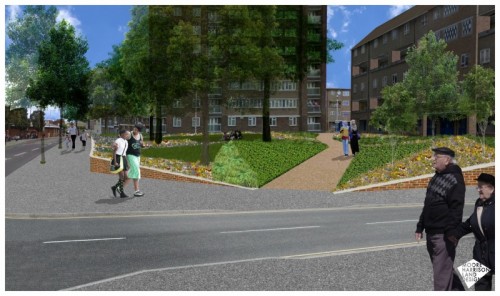 The once unused and unloved grounds of Hackney’s Trelawney Estate are to be given a new lease of life thanks to a £90k makeover that reflects the borough’s horticultural past.

Work is well underway to transform the outside area of the Hackney Homes estate, in Morning Lane, into one of 100 Pocket Parks that provide trees and greenery to city areas.

The mini parks have been springing-up across the capital since November 2012, providing small areas of attractive green space to provide sanctuary from the hustle and bustle of city life.

What was once an unused and unwelcoming area, the new the Trelawney Estate Pocket Park will boast a number of outdoor facilities including:

The design of the Pocket Park incorporates many of the ideas from a group of interested Trelawney Estate residents who came together to look at how the estate grounds could be improved and what should be included in the final make-up of the landscape.

The planting scheme and overall design of the new space also draws upon the horticultural history of the site as the location of the former Loddiges Nursery, which from the late 18th century until the middle of 19th century was the foremost nursery in London, housing the largest hot house in the world at the time with an unrivalled collection of palms, orchids and ferns which helped influence planting in the rest of the UK.

The Pocket Park is due to be completed at the end of June and will complement other improvements to Hackney Central, such as the paving works to the Morning Lane Triangle, and the ongoing Fashion Hub development, helping to make Hackney a key destination for people in and outside of the capital.

The Pocket Park was funded by the GLA and was match funded by Hackney Council.