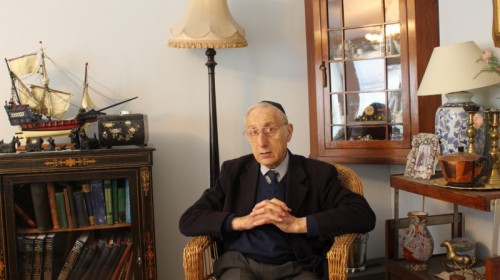 Escaping Nazism, fleeing persecution in eastern Europe or moving out of the overpopulated East End, these were just some of the reasons Hackney’s Jewish population grew between the 1930s and 1950s as people moved into Stamford Hill and its surrounding areas.

Hackney’s Jewish residents have a rich and interesting history, spanning 350 years in the borough. A new display at Hackney Museum, created by young women from the Chassidic Orthodox community group Teen Action, gives us a glimpse into this history around the time of the Second World War and afterwards.

At this time the Jewish community of Stamford Hill was experiencing great change, as new groups arrived bringing with them their different customs and practices, often rooted in other parts of the world.

Through film, photography and written stories, memories are shared first-hand by seven members of the community who recall their feelings of migration, their first impressions of London and what everyday life was like in Stamford Hill more than 80 years ago.

Young people from the Jewish community in Stamford Hill researched, developed and designed the display with the help of Hackney Museum. The project was supported by a £9,900 grant from the Heritage Lottery Fund (HLF).