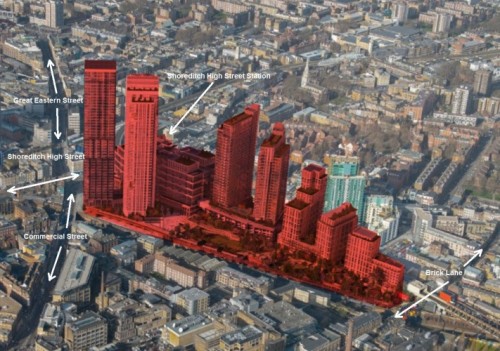 A new public consultation has been launched on the proposals for the Bishopsgate Goods Yard, which would dramatically change the heart of Shoreditch.

People have 21 days to comment, and Hackney Mayor Jules Pipe is urging all those who have so far only voiced opinions on social media or signed an online petition to make sure they also submit a response. It is these individual responses which will carry most weight as part of the formal planning decision.

Developers want to construct 12 buildings across the 11-acre site, which runs from Shoreditch High Street to Brick Lane. The tallest is a 177.6m (47 storeys) tower - more than five times the height of the TEA building opposite, and equivalent to the Gherkin.

The other buildings range in height from 152m (39 storeys) to 24m (7 storeys). Most of the site is earmarked for apartments, only 10% of which are proposed as ‘affordable’. Based on nearby developments, it’s estimated others could start at about £700,000 for a studio flat.

Last month, Hackney and Tower Hamlets councils’ planning committees rejected the application, which spans both boroughs, the tallest towers being on the Hackney side. The many grounds for refusal included the severe impact on the area’s character and heritage, loss of light to nearby homes and businesses, lack of affordable homes and business space, and build quality.

However, at the request of the developers, London Mayor Boris Johnson ‘called in’ the application, meaning he alone will decide whether to approve it at a public hearing expected to take place in March.

This new consultation is taking place because, after the decision was called in, GLA planners realised the developers had not provided enough information about the impact of their proposals, so they asked for a more detailed assessment. This has now been supplied.

These proposals will destroy the heart of Shoreditch. A development dominated by luxury flats will stifle the local tech and creative sector while doing nothing to address London’s housing crisis.

“We know thousands of residents and businesses are strongly opposed to the plans, and this has been demonstrated via social media, online petitions and public protests. These are great as a way of demonstrating the strength of feeling, but they don’t carry weight in the formal planning process. I’d urge everyone who really wants to make a difference to respond directly to the GLA. A short email explaining your concerns is all it takes.

All views received by 15 February will have to be taken into account. Anything received afterwards is at the discretion of the GLA.

The opinions of people who have already commented on the proposals by email, letter or planning portal, either to Hackney Council before it was called in, or to the Mayor of London afterwards, should still be taken into account. However, people can re-submit their views in light of the new impact assessment to make it clear that they still hold them.

The notice of the new consultation can be viewed online, and the GLA has a web page dedicated to the Bishopsgate Goods Yard hearing, which contains links to the various planning documents. It has also set up a dedicated email address for people submit their views -bishopsgate@london.gov.uk