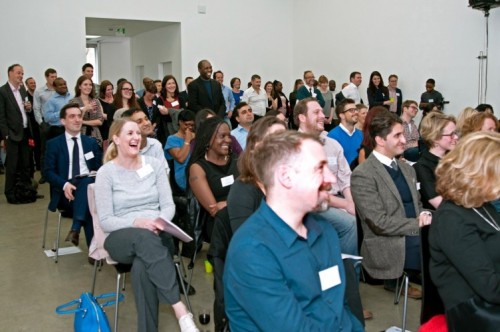 The charities pitched to an audience of around 75 to raise funds for their community projects during the event at Lyst Studios in Hoxton Square.

Award-winning local youth group The Crib received £2,763 for an innovative music project to strengthen relations between the police and young people; Sev Necati Training, which provides self-defence and personal safety training for local women, was pledged £2,795; and Evergreen Play received £2,950 of support for its supervised adventure playground for young children.

The crowd were also treated to an exclusive performance from stand-up comedian and Hackney local, Ava Vidal, a regular TV presence on Mock the Week, Michael McIntyre's Comedy Roadshow and Kings of Comedy.

Matt Bray, Communications Director at Hackney CVS, founding organisation of Hackney Giving, said: “It was a fantastic evening and we are delighted that three local charities have walked away with much needed funding for their projects. We’d like to say a huge thanks to Lyst for hosting us, to Ava Vidal for a brilliant set, and most of all, to our generous audience for donating to the charities.”

Since February 2014 Hackney Giving has raised £200,000 and so far distributed more than £100,000 to a wide range of community organisations.