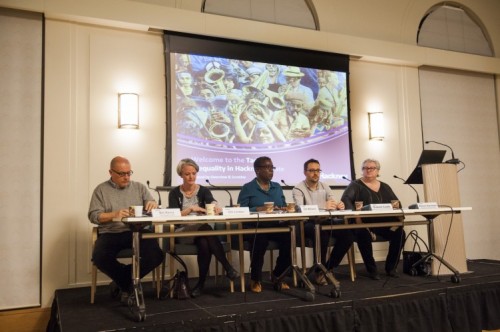 More than 200 people packed into Hackney Town Hall to join councillors and social policy experts to debate inequality in the borough.

The event - Tackling Inequalities in a Changing Borough – was open to all residents and interested parties, who were invited to discuss how changes in the borough have impacted employment, poverty and community cohesion.

Housing topped the agenda, with audience members and panellists alike calling for rent controls in the private rented sector. Bill Kerry went on to discuss the role of financial equality in social cohesion. He said: “Workers paid the national minimum wage would have to work for 342 years to earn the average annual pay of a FTSE 100 CEO.”

He went on to acknowledge that councils’ powers are limited and that some spending allocation was out of their control, but said: “Hackney should consider …adopting a goal that the net impact of our spending policies will be to reduce the gap between the richest and the rest of the borough.”

Graham Cooke talked about the importance of local schemes – like the Council’s Ways into Work scheme – in helping the long term unemployed back into the work place and the social benefits of work, while Alison Garnham highlighted the challenges the borough faces around child poverty.

She said that two thirds of poor children comes from working families and said that welfare cuts had had a disproportionate effect on them. “Two parents earning the minimum wages only earn 82% of the cost of raising a child,” she explained.

It was great to see so many people – many of whom had never entered the Town Hall before – turn out to debate inequalities and the impact it has not just on income but also on health, community safety, educational attainment and access to employment.

We don’t have all the answers and we know that as a council, our powers are limited in some areas, but it’s vital to discuss the issues which are having such a huge impact on our community, so that we can ensure we’re doing everything we can to support and enable our residents to take advantage of the opportunities Hackney has to offer.

Cllr Sophie Linden added: "It was a thought provoking evening – with new ideas but it was also heartening to see that so much of the best practice mentioned by the experts is already in place in Hackney.This is just the beginning; in the new year the Council will be getting out into the community to talk to as many people as possible to ensure everyone’s voice and opinions on inequality are heard. We will be following up on the ideas and concerns raised during the debate.”