Lifeguards save life of man at Council swimming pool 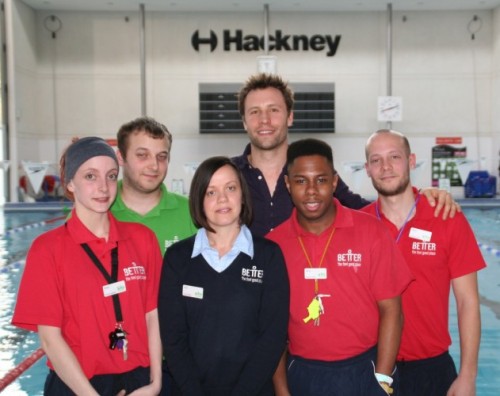 A grateful teacher who was brought back to life by quick-thinking staff at a Hackney Council leisure centre has returned to thank those who saved him.

Hero lifeguards at Clissold Leisure Centre performed six rounds of CPR on 35-year-old Ed Bray after pulling him unconscious from one of the complex’s 25m pools on Saturday.

Regular swimmer Ed, from Camden, was unaware he was in difficulty until he suddenly shut down “like a computer, when the power cord is pulled”.

Ed had stopped breathing and was blue when rescued from the Stoke Newington pool by lifeguards Kirsty Gifford-Pitcher and Darryl Kelley.

“The first thing I knew about what happened was when I heard the sound of loud breathing,” he said, “that was me - I had started breathing again but it was really laboured. The whole experience was very surreal - I had stared death in the face - and very frightening.”

Ed had suffered hypoxia – lack of oxygen supply to the body – whilst swimming underwater at the centre.

Manager Vicki Smith and lifeguards Filippo Fusi and Alex Rainsby performed chest pumps and mouth-to-mouth for around five minutes until Ed began breathing again before paramedics transferred him to Whittington Hospital in Archway, North London, where he was monitored overnight.

“The lifeguards were absolutely brilliant,” Ed said, “as were the paramedics and everyone at the Whittington, and I’m incredibly grateful to them all.”

He added: “I’m still a little sore and a little shaken but I’m here to tell the tale and that’s all because of the quick-thinking of the lifeguards. I want to say a huge thanks to them.”

Filippo, a former beach lifeguard, said at a reunion with Ed yesterday (Weds): “I was so relieved when he started breathing again and then talking. I said ‘We’ve brought him back’. I’ve been quite emotional since it happened but seeing him now makes me really happy.”

The lifeguards are employed by GLL, the Council’s leisure contractor, and undergo some of the most rigorous training in the country which includes four hours of refresher courses every month.

Vicki said: “Everyone’s training kicked in and we all worked together to ensure Ed was given the best treatment possible, saving his life. It’s only now things have sunk in. I’m so proud of all the staff that day and so happy to see Ed’s made a full recovery.”

Ed is now fundraising for the Whittington Hospital. To donate, go to: everyclick.com/sinkorswim

Lifeguards save life of man at Council swimming pool
Newsroom