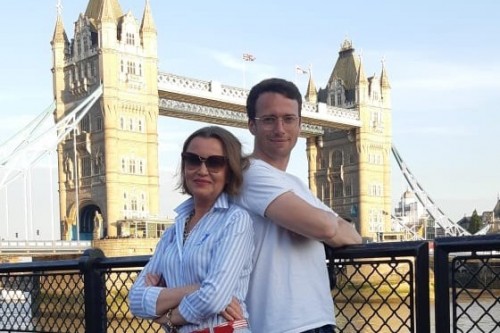 Hackney Council is calling upon residents who can offer space in their homes to people who have fled Ukraine to get in touch.

As part of the government’s Homes for Ukraine scheme, the council is currently working to advise and support residents who have already opened their homes to people coming from Ukraine.

However, as the war continues, more refugee families are arriving here needing temporary placements. There are also people that have already arrived from Ukraine that are unable to stay in the home they’ve been matched to and need to find another host.

Being a host can be a really rewarding experience like it has been for London Fields resident Ben Carr, 30. He opened up his home to Olena, 49 who arrived from Ukraine in May.

Speaking about his experience he said: “I wholeheartedly recommend. It's hard to say without sounding a bit OTT and fluffy, but it's given my life a sense of meaning that wasn't there before. Something to tell the grandkids and all that.”

He said: “I had been obsessing over twitter feeds from Ukraine since February and it's been really depressing to read all that and not do anything. When I saw the scheme I happened to have a room going. It felt like a good idea.”

Ben admits that he was a bit uncertain at first as to how the “whole age/gender/culture gap would play out.” He said: “I'm a scruffy young guy, rough round the edges, while Olena's a very refined middle-aged woman. But despite all that (or maybe because of), we've got a good dynamic going. She makes me laugh, especially when giving me unsolicited life advice "pull your trousers up - it looks like you're wearing a diaper".

Ben explains that as a host there is lots of support from charities and Hackney Council.

He added: “Through Olena, I'm now less naive about the life of a refugee in the UK and the effects war has on people's everyday lives. I've also learnt I'm a big fan of Ukrainian soups.”

We are incredibly grateful to everyone who has supported the Homes for Ukraine scheme so far, we truly thank them for their continued help and generosity.

The sad fact of the matter is that as the war continues we need more sponsors to offer accommodation in their homes to people who have fled Ukraine.

If you, or anyone you know, think you may be able to provide a home then we would love to hear from you.

The council is continuing to work with government and other agencies to match families to sponsors after carrying out safeguarding and suitability checks.

If you would like to register then please complete this form.

Email homesforukraine@hackney.gov.uk with any questions or take a look at our web page for more information: https://hackney.gov.uk/refugees/#ukraine