Hundreds gather in Hackney to pay respects on Remembrance Sunday 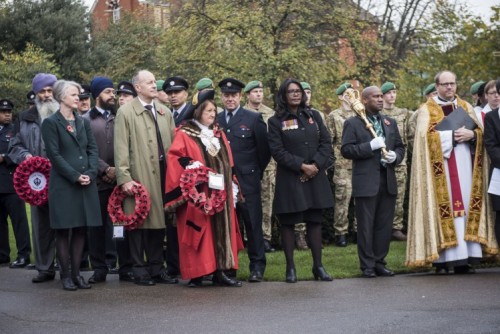 People of all faiths and backgrounds gathered together in Hackney on Remembrance Sunday to honour those who paid the ultimate sacrifice in the line of duty in the 100 years since the outbreak of the First World War.

The Speaker of Hackney, Cllr Sharon Patrick, and the Queen’s representative to Hackney, Lt Col Morriss, were part of a procession of 520, including veterans, the Royal British Legion, Reservists, Sea, Army and Air Cadets, Scouts, police, the fire brigade, Red Cross and St John Ambulance, who paraded between St John at Hackney Church, in Lower Clapton Road, and Hackney Town Hall, Mare Street.The parade was led by the band of the Jewish Lads and Girls’ Brigade.

At the church and Town Hall Cenotaphs, the Speaker was joined by others, including representatives from many faiths and communities, in laying wreaths to commemorate the fallen.

Leaders from the Buddhist, Hindu, Humanist, Jewish, Muslim and Sikh faiths, as well as a young person, Jonathan Bentill, 19, gave readings outside the church, before all paid their respects during the two minutes' silence.

The traditional march-past salute was taken by Lt Col Morriss and dignitaries in front of the Town Hall. There, the choir of Hackney Empire performed five fitting songs, including 'Total Praise' and 'The Waters of Babylon'.

Representing Hackney on Remembrance Sunday is an honour. We must never forget the sacrifices made by the men and women who lost their lives during the world wars nor those who have died in the line of duty in the wars since. In particular, I would like to give special mention to the men and women from Hackney, past and present, who have dedicated their lives to serving their country.She added: "I would like to thank the choir who gave a particularly moving performance on the day.

Lt Col Morriss said: “I would like to thank all those who attended and contributed to making the day a moving tribute not only to the fallen of every conflict up to the present day but also to all those horrifically maimed and injured physically and mentally.

“Although there are now none who lived and fought in the First World War, there are few amongst us who did not have a father, grandfather or relation who lived or died in that most horrendous of wars.

“The purpose of the day is not just to remember but to impress on our minds the horrors of war in the hope that we might avoid the mistakes of the past. “

The day was organised by Lt Col Morriss with help from St John at Hackney Church and the Council.