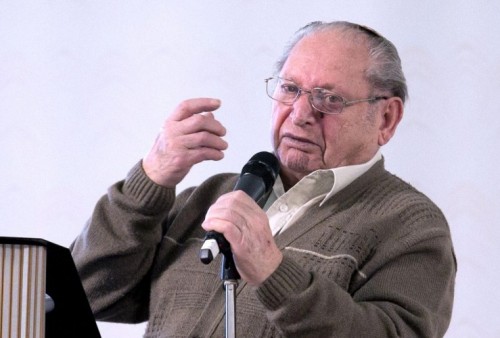 “The British government said they would take 1,000 Jewish children,” said Solly Irving, “but they could not find 1,000 to take.”

It was the end of the Second World War and Solly, a 14-year-old Polish Jew, was one of the ‘lucky’ ones. He had just been liberated from the Theresienstadt concentration camp, in Czechoslovakia, and was to be taken to a new life in England.

Against all odds, he had survived the Nazi’s murderous mission to exterminate the entire Jewish population, and other ‘undesirables’, of Europe. Six million others, including his entire extended family, had not.

Solly, now in his 80s, had grown up in eastern Poland, with his mother, father and sisters, and was just nine years old when war broke out.

When the Nazis decided to liquidate his village, Solly and a sister managed to escape, but tragically, he was forced to abandon the girl when she was caught by a Polish farmer.

Solly, alone and still not yet a teenager, survived for months on the run “trying to find food, trying to stay hidden”, before he was captured and imprisoned by the Nazis.

He was sent to four labour camps, including Buchenwald and then later Theresienstadt – the infamous setting of the Nazi propaganda film depicting a ‘model Jewish settlement’ and which also served to dupe visiting Red Cross workers. In fact, the camp saw tens of thousands of inmates worked, starved or tortured to death.

Solly’s remarkable story of survival was down to a mixture of determination, luck and also the parting words of his father, who had urged him: “Stay alive and tell people what is happening.”

And that’s what Solly has been doing ever since, including at yesterday's Holocaust Memorial Day (HMD) service, in Hackney Town Hall, where around 100 members of the public, dignitaries and school children gathered to hear his story and pay their respects to those who died at the hands of the Nazi regime as well as to all those who have been murdered in genocides around the world since.

This year’s ceremony, themed on ‘Don’t Stand By’, coincided with the 70th anniversary of the liberation of the largest and most notorious Nazi death camp, Auschwitz-Birkenau.

Reflections came from Cllrs Harvey Odze and Ian Sharer. Cllr Odze told the room: “Racism and extremism are not confined to a political ideal or geographical place. When you see something happening, you must stand up and be counted.”

He added: “Hackney is one of the most diverse places in the country and I am proud that we live in harmony in this borough.”

She finished with a quote from Martin Luther King: “Even if I knew that tomorrow the world would go to pieces, I would still plant my apple tree.”

Also included in the service were songs by the choir of Simon Marks Jewish Primary School and statements of commitment to equality from members of the Council and students from Mossbourne Community Academy, Stoke Newington School and The Urswick School.

After the service, Cllr Etti placed a floral tribute at the Holocaust Memorial tree, in Town Hall square.