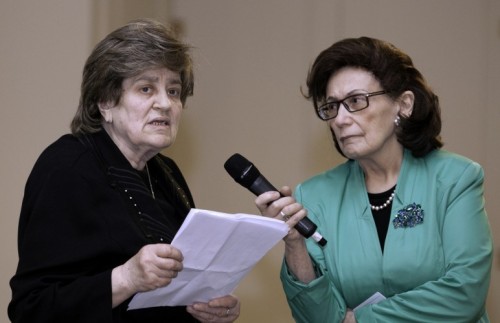 “Half-crazed with hunger” Hannah Brief devoured scavenged, rotten potato peels; they were like something “from heaven”, she said, after surviving for so long on grass.

The painful memory of Stutthoff concentration camp is one of 73-year-old Nazi Holocaust survivor Hannah’s earliest.

At the age of three, Hannah, along with her mother, elder sister and younger brother, were rounded-up from the Hungarian town where they lived and imprisoned by the "two-legged angels of death".

Hannah’s mother was made to undertake dangerous, “back-breaking” tree-felling at the camp where more than 80,000 prisoners of the Nazi regime were murdered: worked to death, starved, gassed, or left to die of illness.

Incredibly, the trio survived not only the Polish prison, but a further two death camps before being eventually liberated by the Russians from Theresienstadt concentration camp, in what is now the Czech Republic.

Tens of thousands died at Theresienstadt which had been the setting of the infamous Nazi propaganda film which falsely depicted ‘how well’ the Jews were being treated during the Second World War and where International Red Cross inspectors had been similarly duped during a visit.

Hannah, who has lived in Hackney for around 70 years after being brought to England after the war by hero Rabbi Dr Solomon Schonfeld, is among the youngest survivors of the Nazi Holocaust, along with her little brother.

“After the war, he remembers being held aloft and being passed around from hand to hand” said Hannah of Manor Road, Stoke Newington. “They couldn’t believe a Jewish baby had survived. There were no Jewish babies.”

But her father - along with six million other Jews and many more other “undesirables” including Gypsies, Slavs, black people, disabled people, gay people and political opponents - had not been so lucky.

Having been separated from his family in Hungary to work in Nazi slave labour, Hannah’s father, stricken with typhoid, had ended up with hundreds of others in a hospital. Soon after, the Nazis torched the building, burning alive most of the patients.

Hannah’s father, along with a handful of others, escaped, but he was too ill and badly burned to survive. “We never found out where he was buried,” Hannah said.

Hannah’s emotional account of her remarkable story of survival formed the climax of a highly-charged and moving Holocaust Memorial Day (HMD) ceremony in Town Hall on Tuesday (27 January).

Around 100 members of the public, dignitaries, and school children gathered to pay their respects to those who died at the hands of the Nazi regime as well as all those who have been murdered in genocides around the world since.

This year’s ceremony, themed on ‘Keep the memory alive’, coincided with the 70th anniversary of the liberation of the largest and most notorious Nazi death camp, Auschwitz-Birkenau.

Year 13 pupil Luke Fisher, of the Mossbourne Community Academy, recently visited the camp in Poland, and told the audience: “This had been the scariest, worst place in the world. Just because [the prisoners] had their individualism snatched from them, we can’t forget them.”

Also included in the service were songs by the Year 6 choir of Simon Marks Primary School; a reading from The Book Thief by Mossbourne student Eri Okoye; reflections from Cllrs Harvey Odze and Ian Sharer; statements of commitment to equality from members of the Council, and pupils of the Cardinal Pole Roman Catholic School and the Urswick School; and traditional Jewish music from Eli Ollach and Motti Grunwald.

At this annual event, we honour the survivors of this and other abhorrent regimes. Our programme focuses on how we can use the lessons of their experience to inform our lives today. We pause to reflect on what can happen when racism, prejudice and evil propaganda are left unchallenged.

As well as remembering the victims of genocide, HMD also aims to educate on the dangers of all forms of discrimination as well as to promote community cohesion.

In her account, Hannah urged people of the world to accept each other’s differences in order to live in peace. “We are one, mankind, and we all have different potentials,” she said. “Like an orchestra with different instruments and players, we can’t harmonise on our own, but when we play together, it works.”

After the service, Cllr Patrick placed a floral tribute at the Holocaust Memorial tree, in Town Hall square.