Hackney residents joined ex-service men and women, Scouts and Cadets from the Fire Services, Police, Sea, Army and Air, to remember the fallen at the Borough’s Remembrance Sunday parade and service on Sunday 11 November.

The Speaker of Hackney, Cllr Clare Potter, and the Queen’s representative to Hackney, Lt Col Morriss, were part of a procession of over 1,000 from the Town Hall to St-John-at-Hackney War Memorial to honour those who gave their lives in the First World War and every other conflict in the 100 years since the Armistice at the end of that war.

The parade was led by the 31 Sqn Air Cadet band with the band of the Jewish Lads and Girls’ Brigade in support. People of all faiths and backgrounds gathered to take part in the moving service to recall those who had laid down their lives but also to commemorate the end of that conflict.

On arrival at the memorial, the Speaker and Col Morriss laid wreaths at the Cenotaph followed by community leaders and many individuals and organisations to commemorate those who lost their lives during military service. Faith leaders from across the borough gave readings invoking their prayers for peace and tolerance, before all paid their respects during the two minutes' silence; recalling the tragedy of war and the appalling loss.

Reverend Al Gordon led a moving service around the Cenotaph attended by all who had marched, including the Mayor of Hackney, Philip Glanville and Hackney MP, Meg Hillier. The parade then made its way back to Hackney Town Hall for the traditional march-past and salute. 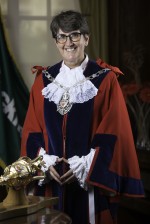 Sunday’s service was very moving and it was an honour to stand alongside the hundreds of residents to pay tribute to our fallen service men and women from across Britain and the Commonwealth countries. It was an especially poignant ceremony on the 100th anniversary of the end of the First World War, as we remind today’s generation of the sacrifice those in the past have made. There are many local families who have been affected by war and the bravery and sacrifice of those who served during the World Wars and all conflicts that have taken place since must not be forgotten.

Lt Col Morriss said: "That it is only by all generations being reminded of the loss and tragedy of war that we might be able to avoid future conflict. The parade brought home that tragedy by including the young who had, in that and every subsequent war, volunteered or were called up to battle in defence of those persons and homes they loved; whilst those who had returned, many injured in body or mind, hoped for peace and a better, more understanding country."

This year also marks the 100th anniversary of the end of the First Word War, this was commemorated by the lighting of a beacon by the Speaker on the roof of the Empire during the evening. The First World War is also being commemorated locally at the Queen Elizabeth Olympic Park, with a free exhibition ‘Shrouds of the Somme’ open until 18 November. Tens of thousands of handmade figures have been laid out in the park, representing the 72,396 British Commonwealth serviceman killed at the Somme with no known grave.