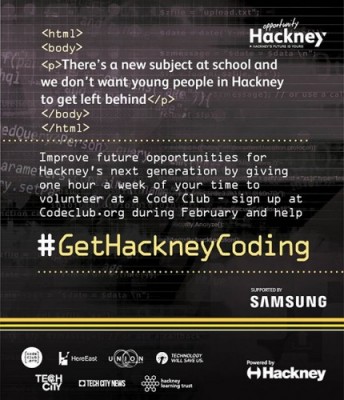 This week marks the end of Hackney’s ‘month of code’, a campaign dedicated to raising awareness of coding in the primary school curriculum.

Hackney Council and the Hackney Learning Trust joined forces with global technology giant Samsung and a host of national and local tech partners for February’s #GetHackneyCoding.

The campaign used social media and a poster campaign to spread the word about the importance of coding in the school curriculum, receiving 1,080 mentions* and an estimated social reach of 6.2 million users.

Using the campaign hashtag, schools, young people, tech professionals and families from across Hackney joined the conversation on Twitter to share their coding experiences. A competition for 5-18-year-olds to design their own game and win the chance to build it has also been running throughout, and will end on 9 March.

Not only did the campaign build a conversation throughout the Hackney ‘month of code’, local Tech City businesses also added their support with 44 volunteers signing up to teach afterschool code club sessions during February*, helping to support young people who want an extra helping hand to get started on how to code.

A number of informative and entertaining #GetHackneyCoding videos were also uploaded onto the Hackney Council YouTube channel featuring interviews with residents, businesses, and partners. One video shows the Mayor of Hackney, Jules Pipe, visiting a code club at Betty Layward Primary School where seven-year-old Patrick shows him how to code using the scratch platform that helps teach beginners how to code.

On 24 February, to mark the end of Hackney’s first #GetHackneyCoding campaign, a special event took place at Hackney Council’s new Opportunity Hub based in Hoxton. The event brought together local business leaders along with the partners that supported the campaign: Samsung, Code Club, Tech City UK, Here East, Union Developments, Technology Will Save Us, Tech City News, 3Beards, Buzz Radar and Ace Hotel.

The Get Hackney Coding campaign, with the support for all of our partners, has helped draw attention to the latest addition in the school computing curriculum which will help to give young people the skills to forge future careers in the tech sector, an industry that is strongly linked to Hackney’s economic growth and worth an estimated £105 billion in the UK alone.

The 'month of code' is a clear demonstration of how the Council, with the Hackney Learning Trust, is helping to broker opportunities between businesses and our wider community to support young people to get the education, work experience and support they need.

The Get Hackney Coding campaign has been a great success, using social media to reach an audience of over 6 million online or offline in homes, schools and the workplace. I am looking forward to seeing the great things that will come out of Hackney’s month of code over the year ahead.

Get Hackney Coding has been a resounding success not only in how many young people have enjoyed coding this month but also in finding teachers to pass on these core digital skills. The Code Club Pro teacher training sessions are fully booked for March and we are keen to see the on-going impact of this training for teachers and pupils alike.

We support the development of digital skills for young people throughout the UK through our partnership with Code Club as well as initiatives such as our Digital Classrooms and Digital Academies. We’d like to thank Hackney Council for putting digital literacy in the spotlight and we’re looking forward to seeing the continued success of this year’s coding campaign.

Hackney is a council at the forefront of digital innovation.

Watch the #GetHackneyCoding videos on the Hackney Council YouTube channel.