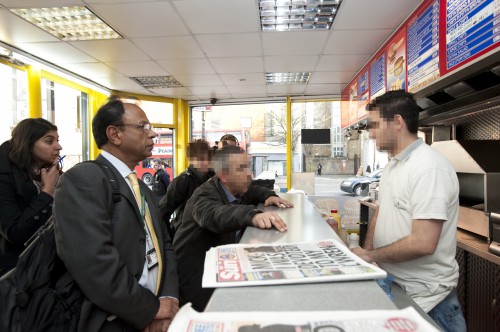 Hackney Council and HM Revenue and Customs (HMRC) have been visiting businesses in Hackney to root out those employers not paying their employees at least the national minimum wage.

In the most recent visits to 24 hour supermarkets licenced to sell alcohol, Wednesday 2 April, HMRC believe one business is failing to pay the national minimum wage to one worker by £10,000. Of the six visits, one business will be investigated on suspicion of PAYE and tax irregularities, and also tax credit issues.

During the operation a total 46 businesses have been inspected and around a quarter of these have been found not to be paying the National Minimum Wage, amounting to £13,800 owed to 14 employees. The first visits took place on Wednesday 19 March with officers visiting 21 food takeaway businesses across the borough. Of these, four businesses were paying five people less than the national minimum wage, costing the employees around £2,800. On Tuesday 11 March, eight teams visited nineteen phone shops six premises were identified as failing to pay eight staff the national minimum wage, worth around £1,000 to the workers.

This joint operation has shown that a quarter of the businesses we visited were not paying the national minimum wage. Many also failed to meet the necessary trading standards and environmental health requirements, which are in place to keep the public safe. We will be visiting these businesses again to check that advice and requested actions have been acted on. We will also continue to work closely with the HMRC to find those employers continuing to flout the law by not paying their employees the legal minimum wage. Hackney Council will continue to work towards making Hackney a fair pay borough, where nobody is expected to do a hard day’s work for less than they can reasonably live on.

Council licensing enforcement officers found that all six businesses breached minor licence conditions such as not informing customers of CCTV and signs requesting them to leave the shop quietly. Five businesses had no evidence that staff had had food hygiene training. Four could not provide proof they have a pest control contract and two had dangerous machinery that will be investigated further. Four of the businesses also couldn’t provide proof of a waste contract and one had no street trading licence.

The Council has given businesses seven days to correct these licensing issues and will be following up with additional visits to ensure that all issues identified have been resolved.

Michelle Wyer, assistant director of HMRC’s national minimum wage team, said: “Paying the national minimum wage is not optional - it’s the law. It is unacceptable for employers to cheat staff and HMRC are pleased to work with Hackney Council to ensure the rules are being followed and take action where they are not.

"Last year over 26,000 underpaid employees got back a share of over £4 million as a result of HMRCs actions.

"Where we find an employer ignoring the rules, we will ensure arrears are paid in full and the employer is fined. In the most serious cases, criminal prosecution can follow. Anyone who believes they are not being paid the national minimum wage can call the Pay and Work Rights Helpline on 0800 917 2368." A 25-year-old man was also arrested by Immigration and Enforcement at Fairway Food and Wine, Stoke Newington Road for overstaying his visa. He has been transferred to immigration detention pending removal from the UK.

“Working with partners like Hackney Council and HMRC we are determined to tackle those businesses that chose to flout the rules. We will continue working together to ensure businesses comply with the law in the future."

HMRC have the formal legal powers to take action against businesses that aren’t paying the national minimum wage.

Employers not paying at least the national minimum wage could be fined, find themselves having to back date pay to an employee and end up in court.

Hackney Council will continue to monitor businesses in the borough and will pass any relevant information to HMRC. Future joint operations are being planned.

The national minimum wage is a legal requirement and all employers must pay this to staff over school leaving age.

The national minimum wage rate per hour depends on age and whether or not someone is an apprentice. Anyone aged 21 and over should receive a minimum of £6.31 per hour.

Hackney Council is a London living wage (LLW) employer and expects to become fully LLW compliant next year for contracted services. The London Living Wage is paid voluntarily by employers and is currently set at £8.80 per hour.

Anyone who believes they are not being paid the national minimum wage can call the national Pay and Work Rights Helpline on 0800 917 2368. Employees can also visit www.gov.uk/am-i-getting-minimum-wage