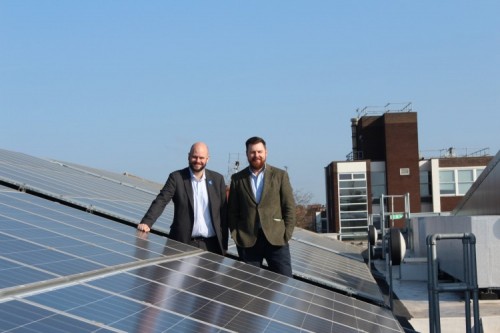 Hackney councillors have approved a motion to do ‘everything within the Council’s power’ to deliver net zero emissions across its functions by 2040, ten years earlier than the target set by the Government, and in line with the Intergovernmental Panel on Climate Change’s higher confidence threshold for limiting global warming to 1.5C above pre-industrial revolution average.

The motion, which was voted for overwhelmingly by councillors earlier this week, built on the Mayor’s climate emergency declaration in February and, for the first time, documented formally both the extensive work on decarbonisation that has been undertaken since the 2018 Local Elections and the stretching targets that the Council will now begin working towards.

As part of the motion, the Council resolved to:

Lots of political administrations around the world have declared a climate emergency, but I believe Hackney’s motion represents one of the most robust, science-based commitments yet delivered. The fact that Hackney Council has been responding in very practical ways to the climate emergency long before we passed this important motion should also give the public confidence that we are fully committed to doing everything within our power to avert a breakdown of the natural systems on which civilisation depends and protect residents of Hackney in the process.

We have already delivered 50% renewable electricity for the Council and many local schools’ needs on 1 April, and will switch to 100% in 2020; we’re establishing a publicly-owned clean energy company that will turn Hackney into a renewables power station; we are rapidly decarbonising the Council fleet of vehicles and addressing land transport sector emissions; we’re decarbonising the built environment through changes to the planning system; we’re investing extensively in green infrastructure to derive a wide variety of environmental benefits, from cooler streets to enhanced biodiversity; we’re creating a model for drastically limiting the use of petrochemical plastics; and we’re investing heavily in our waste service to reduce resource consumption and increase recycling.

However, the public will rightly ask what the Council is doing today that is wasn’t doing before we formally declared a climate emergency. That’s why I’m also proud to announce that we are now reviewing some of our key 2018 Manifesto commitments to see how they can be enhanced and/or delivered earlier, so the public can expect some exciting announcements in the coming weeks and months.