Full steam ahead for second entrance at Hackney Central Station 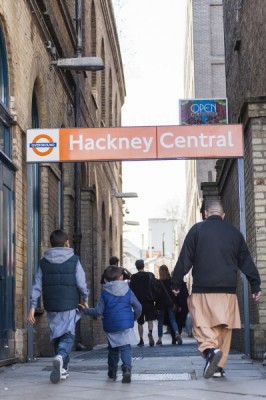 The proposals will see an additional entrance and ticket hall built on Council-owned land at 231-237 Graham Road, giving passengers direct access to the westbound platform of the station.

This additional entrance will help to ease passenger congestion and provide long-term improvements for passengers, such as better and quicker walking routes to and from the town centre and the interchange with Hackney Downs.

Since its launch, the London Overground has seen passenger numbers increase by approximately 160% with continued growth predicted, while the number of passengers using the walkway from Hackney Central station to Hackney Downs has rocketed by 340% since it opened in 2015.

User surveys carried out by Transport for London (TfL) showed that around 30-35% of existing passengers would use the proposed new entrance instead of the existing route.

In addition to the planned entrance, new cycle parking, drinking fountains and public space will be created, including a number of new trees as part of the Council’s commitment to tackle the climate emergency.

The plans have been informed by feedback from residents during the Hackney Central conversation, a three-month engagement project in 2019 to find out what they wanted to improve in the area.

The new station entrance is being delivered in partnership between Hackney Council, TfL and Network Rail, with TfL applying for planning permission, which is an important step forward in delivering the temporary new entrance and they will also be responsible for carrying out the building work.

I am pleased that plans for a much-needed new entrance for Hackney Central station have got the go ahead. Anyone who uses the station will know how overcrowded and busy the station can become, and the existing station entrance is now too small to handle the current volume of passengers passing through it, especially during peak periods and for more vulnerable users.

By providing our own land to create a southern entrance, this partnership and joint investment is the first part of a longer term solution to issues around the station - which will eventually unlock the opportunity to comprehensively refurbish the north side of the station to make sure it too provides the safe and welcoming arrival to Hackney Central that passengers deserve.

It’s great news that plans for this new station entrance at Hackney Central have been approved. It will provide customers with easier access to the town centre and help reduce pressure on the existing entrance, which will make the customer experience in the station more pleasant. We look forward to welcoming customers through this new entrance in late 2021.

Construction work on the new entrance will begin in the New Year with an anticipated opening in late 2021.

Full steam ahead for second entrance at Hackney Central Station