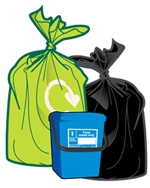 Fortnightly waste collections are set to be introduced for some households in Hackney, as part of an effort to further boost the borough’s recycling rates and reduce the amount of waste sent for incineration.

The decision, made by the Council’s Cabinet last night, follows a consultation in which nearly 11,000 people responded.

The change means that, from Spring 2021, non-recyclable waste collections will switch from once a week to every two weeks at street-level properties in Hackney — generally houses, or houses that have been converted into flats and currently have green sack recycling services.

These households will keep weekly recycling and food waste collections, to encourage people to recycle as much as possible and reduce the amount of waste sent for incineration. The changes will not affect estates or blocks of flats.

The 15 London boroughs that have already implemented fortnightly collections in order to meet targets set in the Mayor of London’s environment strategy — which all London councils are signed up to — have seen increases in their recycling rates.

If these increases were replicated in Hackney, around 4500 tonnes of waste — the equivalent of the waste contained in 450 bin lorries — would be recycled instead of incinerated every year.

As part of the change to fortnightly waste collections, the Council will give every household a 180 litre wheeled bin — double the size of a standard round dustbin, giving households a maximum of 5-6 black bin bags worth of space every fortnight.

In line with all other London boroughs that have introduced fortnightly collections, households will only be permitted to use the space in this bin for non-recyclable waste in an effort to encourage households to recycle more using their weekly green sack and blue bin food waste collections.

To address these concerns, the Council is giving each household a wheeled bin — which, coupled with predicted increases in food recycling rates, will help to improve hygiene and reduce vermin. In the consultation, 59% of people wanted the Council to provide a bin if the proposals went ahead.

In response to the concerns of those in larger households, the Council will also make more bin space available to households with more than four people, subject to an assessment carried out by the Council’s recycling team.

With fewer overall waste collections, it’s also expected that there will be reduced traffic disruption and fewer emissions generated from waste vehicles.

While Hackney residents have made great progress in increasing the amount they recycle — from 1% in 1998 to around 28% today — introducing fortnightly waste collections will help people to further reduce the amount of waste that is thrown away and sent for incineration, as well as increase the proportion of waste that is recycled. This will help us reduce the borough’s impact on the plant and meet the ambitious targets we set in our Climate Emergency declaration to reduce emissions to net zero by 2040.

Hackney has an important role to play in demonstrating that it is possible to rapidly transition away from a consumption and waste model that is undermining the natural systems upon which all life depends. The delivery of fortnightly waste services sends the strongest possible message to our residents that we will leave no stone unturned in seeking to ensure that the council operates within the finite limits of the planet.

Residents who already recycle should notice only a small change to collections as the new bins provide more than enough space for two weeks worth of waste for an average household. We hope that the new bins will help people think about what more they can recycle. For the residents who don’t already recycle, we’re asking them to start recycling easy items like paper, glass, cans, plastic bottles and food leftovers to help get ready for the changes. To help people do this, a team of doorknockers will visit every affected household ahead of the changes.

I’d also like to reassure respondents to the consultation that we have looked in detail at all of the 11,000 responses and are doing everything we can to help ensure that groups who identified concerns in the consultation — larger families and those with disabilities — are not adversely affected by the changes, and we’ll be working with these groups to help support them and find out more about their concerns in the coming year.

The Council will introduce the fortnightly collections in Spring 2021.

Residents can find out more about the proposals and order additional green recycling sacks and blue food waste bins at www.hackney.gov.uk/fortnightly-waste.