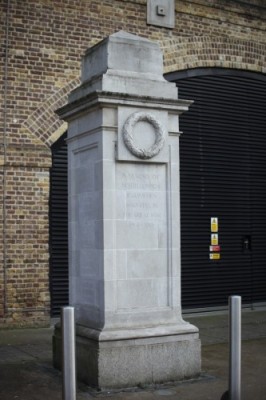 Three of Hackney’s First World War memorials have been granted Grade II listed status thanks to a Historic England project.

Two memorials can be found in the grounds of local churches, All Saints in Haggerston and St Barnabas in Homerton, while the third – in tribute to North London railwaymen – is by Hoxton Overground Station.

Listing these monuments as having ‘special architectural or historic interest’ helps preserve an enduring link to the one million British military personnel who died in the First World War, from 1914 to 1918.

The move is part of a drive by Historic England to list 2,500 war memorials across the UK in time for the 100th anniversary of the conflict this November.

The Hackney memorials are part of the 1,860 that have already been listed since the project was launched on the centenary of the war’s outbreak in 2014.

The church memorials were two of many erected in parish grounds across the country. They were places to remember those local people who had been killed in the war, due to the official policy at the time of not repatriating the dead, these monuments were often the focus of grief for those who had lost loved ones.

The North London Railwaymen memorial was originally erected at Broad Street Station, which ceased operations in the 1980s, on completion of the East London Line in 2010 the monument was moved to where it is now stands on Geffrye Street. There are 65 names listed on the stone obelisk, including two who died in 1919 from their wounds, a poignant reminder of the grave repercussions that carried on even after the war had ended.

All of Hackney’s communities would have suffered loss and devastation during the First World War. It is important that these monuments are listed and preserved to help secure a very public remembrance of that struggle for peace, which still continues across the world today.

Kim Wright, the Counci’s Group Director for Neighbourhoods and Housing, with responsibility for heritage
„

Gill Grayson, Interim Director of Listing at Historic England, said: “Researching, recording and recommending up to 2,500 more war memorials for listing over the five years of the First World War’s centenary has been a major task but one that Historic England has proudly pursued. These memorials gain a place on the National Heritage List for England to tell the story of this country’s sacrifice and struggle.”