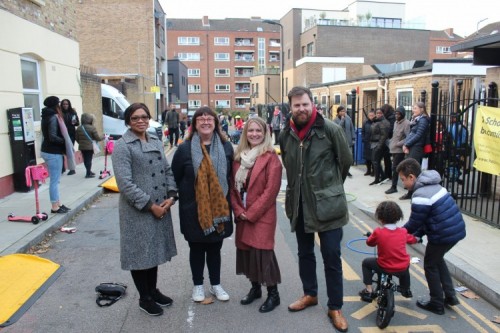 Barn Street, outside St Mary’s Church of England Primary School in Stoke Newington, became Hackney’s eighth School Street this week, seeing motor traffic banned at the school’s opening and closing times, which will make it easier and safer for children to walk to school.

The St Mary’s launch came as the Council announced a further nine schools it would consult on introducing School Streets in the next year.

Subject to the results of the consultations, this would see the Council reach its target of introducing 17 School Streets in 2021 a year earlier than planned.

Following this, the Council will accelerate the roll-out of School Streets by carrying out assessments of all primary schools in the borough, and move forward with introducing a School Street at each one, unless they opt-out.

A recent review of Hackney’s first four School Streets showed that traffic and vehicle emissions outside the school gates is down and the number of children walking and cycling to school is up. The schemes have also proved popular with residents with the latest consultations showing 86% and 69 % support.

We’re committed to tackling London’s toxic air, reducing the motor vehicle emissions driving the climate emergency and reclaiming our roads for walking and cycling. By delivering our manifesto target to introduce Schools Streets at a third of Hackney primary schools a year early, we can go even further and expand School Streets to all primary schools in the borough, making it easier and safer for kids to walk and cycle to school. Given the success of the pilot and the urgent need to improve air quality and get more people walking and cycling, from January 2021 all primary schools in the borough will be automatically enrolled and considered, unless they opt out.

There have been many concerning incidents with vehicles speeding down or reversing into Barn Street when children and families are leaving or entering school, so I am extremely pleased to have a School Street here at St Mary’s. The safety of our children is paramount and this will certainly help.

St Mary's will also be one of the first to receive a green screen through the Council's newly refreshed Green Screen for Schools programme. The Council is currently commissioning experts in the field to recommend the best product for blocking air pollution through green infrastructure and will then roll out the new standard to every school adjacent to a main road.

For more information about School Streets in Hackney see: https://www3.hackney.gov.uk/school-streets.