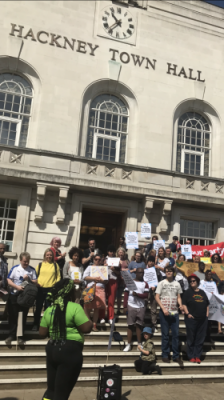 Thousands of people will march across the country, and the London march will see a 13,000-name petition handed in to Downing Street. The campaign calls for better awareness and funding for special needs education.

Today I will be joining thousands of parents, carers, children and teachers - all of whom are giving up a day of their precious half term holiday to call on the Government to address the funding crisis in special needs education.

In Hackney we’ve been talking about this for a long time. In the past we’ve referred to it as a ‘hidden crisis’, as the media and politicians focused on concerns about funding for mainstream schools. But over the last few years, councils across the country have reached breaking point, and the pressures being felt by schools, local authorities and parents of some of our most vulnerable children and young adults are spilling into the open.

The root of the crisis is founded in a well intentioned element of the Children and Families Act 2014, which introduced Education Health and Care Plans (EHCPs), to replace Statements of Special Educational Needs. Under the Act, councils are responsible for providing support from 0-25 years, instead of during statutory school age.

Of course we welcome this - supporting children and young people, and helping them to have the very best start in life, is one of the most important things we do as a Council. These changes, along with significant increase in pupil population and the level of SEND need and complexity, means that we’re now supporting more pupils than ever before, and in Hackney 1,900 children and young people currently have an EHCP. The vast majority will have that EHCP until they are 25 years old.

However, the Government has practically frozen the amount of money it gives us to support pupils with EHCPs. To put this into perspective, in 2018/19, the Government gave us £42.5m in High Needs funding, but we spent closer to £52m. We expect this overspend to increase by about £1.7m each year. So far, we’ve found this money by making savings elsewhere, using reserves, one-off grants and moving money from other education funds. But we can’t keep doing that.

Public sector cuts are well documented. In Hackney, we’ve lost nearly half of our Government grant since 2010, and we’ve got another £30m to find in the coming years. This is without having to fill the gap between what the Government gives us for special needs education and what we actually need to spend.

Since becoming the Cabinet Member for SEND, I’ve had conversations with colleagues up and down the country, from councils led by political parties of all colours, and they’re all feeling the strain. And parents are too. Like a number of councils, Hackney was recently the subject of a judicial review into the way we fund EHCPs. It is shameful that Government under-funding pitches hard-pressed parent-carers against local councils that are doing their best to provide support for some of their most vulnerable young people. It cannot be right that councils are being dragged to the verge of bankruptcy, and it cannot be right that parents and carers are being forced to take action against their local council out of sheer exasperation and desperation.

We need properly funded provision, with Government funding linked to the number of EHCPs for which a local authority is responsible. It’s not rocket science - it’s a fair and sensible approach to funding.

This protest is a reminder that, despite localised campaigns, councils and parents are actually on the same side. In Hackney, a co-design group of parents and professionals is continuing work to look at how to best match funding levels with the needs of pupils with SEND. This is a welcome step and I hope it marks a sea change in how we work together. But it can only achieve so much.

Today thousands of people across the country will take to the streets to call on the Government to end its inaction and to hear us loud and clear. This is no longer a ‘hidden crisis’ - this scandal needs to end now.