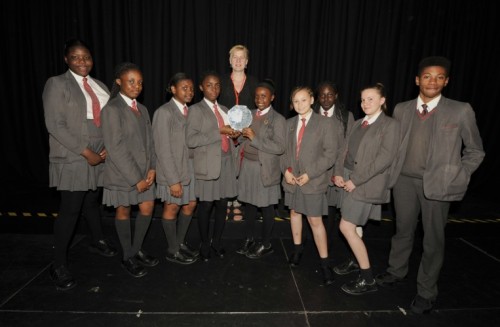 Ten local schools took part in the competition, which celebrates the Carnegie Prize – one of the most prestigious awards for children’s literature. Tanya was one of the judges at the event, and days later she was announced as the winner of the Carnegie Prize, for her book Buffalo Soldier.

A group from each school presented their thoughts on one of the shortlisted books, using a range of visual art, drama, dance and music, at Petchey Academy, on 18 June.

The winning school was Cardinal Pole, whose students delivered a moving presentation on Elizabeth Laird's book, The Fastest Boy In The World. The panel of judges were impressed by the students’ original interpretation of the book, their use of moving image and powerful dramatisations of key scenes.

This was a brilliant event. The students were so enthusiastic, full of energy and imagination. I loved it.

The panel of judges also included staff from Hackney Learning Trust and Jo de Guia, owner of Victoria Park Books, who arranged for the author to visit Hackney.

Cabinet Member for Children’s Services, Cllr Anntoinette Bramble, said: “Our Carnegie Competition is a great way of bringing these exciting new books to life, getting pupils to talk about literature and giving them the chance to meet the author who wrote the award-winning book. Congratulations to Cardinal Pole and all those who took part for some fantastic presentations.”