Bike around the borough 2019 returns for ninth annual ride 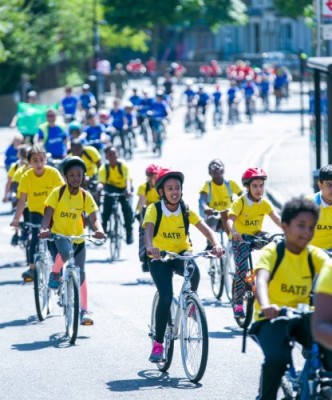 More than 1000 people on bicycles for as far as the eye could see was the spectacular sight in Hackney on Thursday as Bike Around the Borough 2019 took to the roads.

Over 100 adults and 900 children from 42 schools took to the borough’s streets by bike as the sun shone and temperatures soared for the ninth-annual fun-filled celebration of cycling, which continues to be the world’s largest ‘bike bus’ event.

The children, who were cycling together in a ‘bike bus’ - where a group of cyclists ride together along a set route, picking up people as they go - started from Hackney Downs, then made their way to Clissold Park via Stoke Newington High Street, before heading down to London Fields and past Hackney Town Hall back to Hackney Downs.

Riders were supported on the nine-mile route by other school children at ‘motivation stations’, filled with flag-waving, cheering and drumming to spur them on.

Local residents and staff from local businesses also lined the route to show their support.

It was really fun to cycle around Hackney and see places you know but also finding new places and views of London. Best of all it’s not a race, it’s a relaxing ride and you can chat with your friends.

Bike Around the Borough is the Council’s showcase schools cycling event, and aims to give children the confidence and chance to explore their borough by bike.

This is my first year doing Bike Around the Borough and it has been great to see how excited children are to join other schools and discover their borough by bike. It gives them a chance to build on the cycle training we offer and see how fun, healthy and sustainable cycling really is. I’d encourage anyone inspired by Bike Around the Borough, whether you’re an adult or child, to take advantage of the cycling routes we have in Hackney.

This was also our first year as a single use plastic bottle-free event. As a result, thousands of bottles were saved from the bin. I’d like to thank both the organisers and children for embracing the Council’s low and no plastic culture, and look forward to reducing waste even further next year.

Joining Cllr Jon Burke on the day were the Mayor of Hackney, Philip Glanville, and Speaker, Cllr Kam Adams.

Bike Around the Borough is a special day when we close the streets in Hackney to allow young people to reclaim them for cycling. I am thrilled to be involved in this celebration of cycling and young people, and it is a joy to join them, our volunteers and teachers who support the event, hearing their songs and chants as we cycle around the borough. They are so enthusiastic and inspirational. I can’t wait to do it all again next year when it will be our tenth year!

Find out more about cycling in Hackney, including free cycle lessons by visiting www.hackney.gov.uk/cycling.

Bike around the borough 2019 returns for ninth annual ride