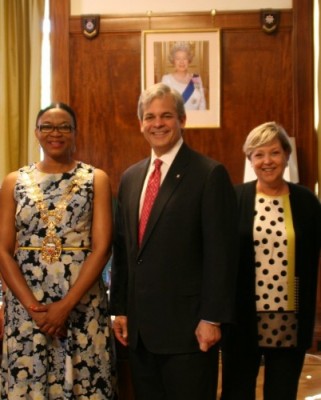 Hackney Council welcomed the Mayor of Austin, Texas, to the borough this week, marking his first international visit to the UK.

Sister cities Hackney and Austin were reunited this week for the first international visit by Mayor of Austin, Steve Adler, following his election victory earlier this year becoming the 52nd Mayor of the Texan city.

Joined by Hackney Council representatives, Mayor Adler was given the opportunity to experience some of the cultural and commercial highlights of the unique east London destination while introducing himself to the borough, strengthening the ongoing relationship between the two cities.

The Mayor was first welcomed to the historic surroundings of Hackney Town Hall by the Hackney Speaker, Councillor Sade Etti, and a delegation of Council representatives to discuss the existing connection between the two cities that was forged in 2014 by the Hackney House Austin trade mission and historic signing of sister city agreement.

Mayor Adler then began his journey across the borough, visiting Hackney Wick and the Accelor Mittal Orbit at the Olympic Park, providing panoramic views of the borough and the transformed landscape following the 2012 Olympic Games.

Moving onto the much-loved and renowned Hackney Empire, built in 1901, the Mayor was given a tour of the inner workings of the theatre that has remained a Hackney landmark for generations of local people and visitors to the borough.

Pausing for lunch, Mayor Adler met students of Hackney Community College at their Open Kitchen, located in the vibrant Hoxton area of the borough. The Mayor listened to students that work at the restaurant which provides valuable training and experience in catering management, food and drink preparation as part of vocational studies for future careers.

The day concluded in Shoreditch, home of the Tech City hub that is recognised as having one of the largest concentrations of creative, tech and start-up businesses in the UK. Mayor Adler visited some of these start-ups at Boxpark, a collection of small, independent businesses that specialise in retail. Mayor Adler heard stories from the business owners that are just starting out on their commercial journeys.

I’m delighted to have the opportunity to visit and be hosted by Hackney, seeing first-hand the innovation, young entrepreneurs, and support local businesses receive from the borough.

As sister cities, Hackney and Austin share many common opportunities and challenges. By visiting the London borough, I want to help build on existing ties between businesses, create soft landings that will help Hackney and Austin businesses expand and become even more successful. Hackney and Austin have already built a connection with Hackney House Austin, South by South West and our historic sister city agreement. Over the coming months and years ahead we will continue to build on this relationship and we will continue to share, learn, and support each other. We will find solutions to attract businesses and generate international trade.

Hackney feels optimistic and energetic and finds way of thinking that generate new ways of working with and creating new ideas. The vibrancy and excitement of this special place location mirror Austin in so many ways.