A nebula in space, fossils uncovered and an underwater scene are just some of the murals painted over the past year by young people working with volunteer artist Alexandra McKenzie, as part of a making amends project.

The artwork was created by young people on reparations orders, which are non-custodial sentences to help prevent further offending and help generate an understanding of the effects of crime. The murals have been painted in the youth offending centre, in rooms where difficult conversations often take place.

Artist Alexandra McKenzie, who lives in Clapton, and whose work has recently featured in the Greenwich Maritime Museum, said: “Rather than repetitive tasks that people usually think of in reparations schemes, the mural painting has lots of aspects to it. As well as something nice to do, there is a sense of completion and pride at the end, that their work will be enjoyed by other young people.”

There are eight murals in total; a sandy beach, coral reef, kelp forest, nebula in space, birds in the sky, fossils, the savannah and a wildflower meadow; which were created using lino-cut prints and specialist fine art paint.

So far since April 2017 nine young people have worked on the project, one 17 year old girl who was on a 10 month reparations order said: “I thought I was going to be doing some really mundane job but this has been interesting and it’s good to do something that will last and be seen by lots of people.” 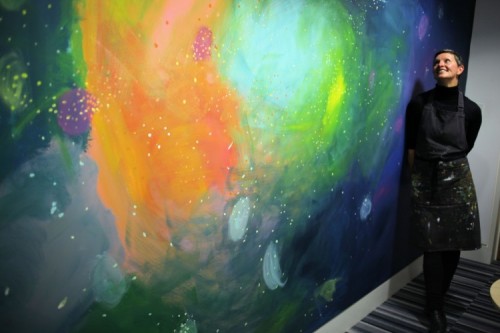 Youth Support and Development Worker, Norman Saggers, who has been working with those involved in the project, said: “It’s great to be able to see the work created by Alexandra and the young people that is both challenging and rewarding. We have had so much positive feedback from the staff that work in the youth offending team about how it cheers them up and brightens up the interview rooms which used to be painted white, creating a sterile environment. Alexandra’s creative approach helps set an environment where young people can concentrate on the work, forget the other issues going on in their lives and reflect on the satisfaction from making a more positive contribution. They get to see that they can do so much more than they thought they could.”

We believe the best way of tackling youth crime is through prevention. The art reparations project is just one of a range effective diversion programs. Which run to not only serve the community, but allow for personal and skills development, ensuring young people transition into an independent and successful adulthood.